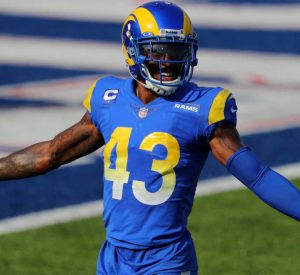 Two years ago, the Browns hoisted a triumphant press conference after pulling off a trade to acquire Odell Beckham Jr. Following the trade, Myles Garrett infamously said that the Browns were “absolutely” the best team in the AFC North. Coming off a surprising 2018 season that saw the Browns win five of their last seven games, it was hard to argue with the Browns’ pass rusher.

Things didn’t materialize for the Browns in 2019. Dysfunction within the facility largely contributed to Cleveland’s highly disappointing 6-10 record. To their credit, the Browns rebounded by having a highly successful 2020 season that included the franchise’s first playoff win in over a quarter century. The cherry on top was the fact that the Browns’ playoff win came against the Steelers, a franchise that has had its way with Cleveland since the 1990s.

While none of their 2020 signings generated the buzz that the Beckham trade did, the Browns made several key acquisitions that contributed to last season’s success. Among those acquisitions were the signings of offensive tackle Jack Conklin, tight end Austin Hooper, linebacker B.J. Goodson, and safety Karl Joseph. The Browns also found a draft gem in left tackle Jedrick Wills, who became an immediate starter while helping protect Baker Mayfield’s band side.

With the draft still several weeks away, we decided to grade each AFC North team’s success during the first two weeks of free agency. We’ll kick things off with Cleveland, where Browns fans have begun bracing themselves for a possible Super Bowl run.

The Browns wanted to strengthen their secondary after finishing 22nd in the league in pass defense in 2020. Cleveland certainly did that with the signings of safety John Johnson III and cornerback Troy Hill. Formerly teammates in Los Angeles, Johnson and Hill helped the Rams boast the league’s top-ranked pass defense in 2020. Johnson can start at either safety position, while Hill will complement fellow Browns starting cornerback, Denzel Ward.

Cleveland also achieved its goal of keeping Rashard Higgins when they signed the veteran receiver to a one-year, $2.38 million deal. The team’s second-leading receiver last season, Higgins should continue to find a role in the Browns’ offense even with Beckham returning from last season’s knee injury.

If those moves weren’t enough, the Browns added significant depth with the signings of Takk McKinley, Malik Jackson, and Anthony Walker. The Browns recently met with Jadeveon Clowney, who would likely replace Olivier Vernon’s 2020 production. If Cleveland is able to sign Clowney, the Browns would have pulled off a near perfect free agency.

The Bengals have yet to find a veteran receiver that can replace Green, one of the top players in franchise history. They reportedly offered Kenny Golladay a contract offer before Golladay ultimately signed with the Giants. Cincinnati still has several solid veteran wideouts they can sign (Sammy Watkins and Antonio Brown are among them) but they’re going to have to move quickly to acquire one.

Cincinnati added to their offensive line — a must — with the signing of former Vikings tackle Riley Reiff. And while Reiff is a solid player, the Bengals passed on the chance to sign one of the top-available linemen in free agency, a list of players that includes Trent Williams, Joe Thuney, and Alejandro Villanueva. Cincinnati’s grade will rise if they are able to land longtime Washington pass rusher Ryan Kerrigan, who was reportedly scheduled to meet with the Bengals.

Baltimore suffered big losses with the departures of linebackers Jihad Ward, Yannick Ngakoue, Matthew Judon and center Matt Skura. Baltimore minimized the damage at linebacker by re-signing Tyus Bowser and Pernell McPhee. The Ravens were also able to retain defensive tackle Derek Wolfe. Baltimore’s best outside free agent signing so far is offensive guard Kevin Zeitler, a player the Ravens surely hope can be a better replacement for Marshal Yanda, who retired after the 2019 season.

Like Cincinnati, the Ravens missed out on signing Golladay after meeting with the veteran receiver last week. Baltimore has yet to sign a veteran receiver who can help complement Marquise Brown. Baltimore was also unable to lure JuJu Smith-Schuster away from Pittsburgh. The Ravens have reportedly turned their attention to Sammy Watkins, who recently helped the Chiefs reach consecutive Super Bowls.

Look for the Ravens to address the loss of Skura during the first round of the draft, especially if Alabama’s Landon Dickerson and/or Oklahoma’s Creed Humphrey are on the board when Baltimore is on the clock. As far as pass rusher is concerned, don’t be surprised if Baltimore addresses this need in free agency as well as during the draft. Among the top-remaining pass rushers in free agency include Jadeveon Clowney, Carlos Dunlap, Justin Houston, Melvin Ingram, Ryan Kerrigan, Aldon Smith and Olivier Vernon.

If inclined, the Steelers still have the option of re-signing longtime starting left tackle Alejandro Villanueva, who remains on the open market. Regardless, look for the Steelers to acquire a new left tackle via the draft. Pittsburgh will also be in the market for a new running back, as James Conner remains unsigned. The Steelers recently made contact with Clemson’s Travis Etienne, the top-ranked running back in CBS Sports’ prospect rankings. Another early option at running back is Najee Harris, who last season helped Alabama capture its sixth national title under coach Nick Saban.

Pittsburgh lost some key players, but they still have Ben Roethlisberger, who next season will be armed with one of the league’s deepest receiving corps. They also have star pass rusher T.J. Watt, multiple Pro Bowl defensive tackle Cam Heyward, multiple Pro Bowl cornerback Joe Haden and All-Pro safety Minkah Fitzpatrick. If they can fill the holes that were recently created in free agency, the Steelers’ 2021 free agency will be looked at in a more favorable light this time next year.