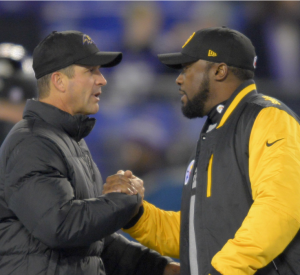 No conference boasted more playoff teams than the AFC North in 2020. Three of the division’s four teams made the postseason, with the Browns and Steelers facing each other in the wild-card round. Cleveland dispatched Pittsburgh before falling just short against the defending champion Chiefs. The Ravens, who finished behind the Steelers in the regular-season division standings, upset the Titans before falling to Buffalo in the divisional round.

Each team has made significant roster changes leading up to the 2021 NFL Draft. One can say the same thing about the Bengals, who are trying to get out of the division cellar after finishing fourth each year since 2018. With the start of the draft just over a week away, we’ve decided to take a look at the current state of each AFC North team. Each team is ranked in the order of how well their offseason has gone entering the draft.

The good: Cleveland has added some significant players to its defense. The Browns signed defensive backs John Johnson III and Troy Hill, two players who helped the Rams boast the NFL’s top-ranked pass defense in 2020. They were also able to come to terms with defensive tackle Malik Jackson, linebacker Anthony Walker and Takk McKinley. The Browns’ recent splash was the signing of Jadeveon Clowney. Offensively, Cleveland successfully kept its receiving corps in tact by re-signing Rashard Higgins.

The bad: The Browns lost a key member of their defense with Sheldon Richardson’s release. And while the move was largely lauded by fans and media members, Cleveland is rolling the dice with Clowney, who failed to record a single sack in eight games with the Titans in 2020. And while Hill is a nice addition, the Browns missed out on the chance to find a No. 2 cornerback opposite former Pro Bowler Denzel Ward.

What still needs to be done: Out of necessity, Cleveland will continue to add to its defense during the draft. Two of our four CBS Sports NFL draft experts currently have the Browns taking former Alabama defensive lineman Christian Barmore with the 26th pick. Our other two experts have Cleveland filling its need a linebacker with the pick. Look for the Browns to also draft a cornerback and a receiver during the draft.

The good: The Steelers’ contract extension of Mike Tomlin ensured that Pittsburgh will have stability for what looks like four important years for the franchise. While he is signed for the 2021 season, Ben Roethlisberger may be playing his final season in Pittsburgh. For what could be his last year, the Steelers were able to bring back his No. 1 receiver, JuJu Smith-Schuster, for a very affordable $8 million. Pittsburgh was also able to retain several in-house free agents, including offensive lineman Zach Banner, cornerback Cam Sutton and Tyson Alualu. Pittsburgh re-signed veteran linebacker Vince Williams after initially releasing him. They also brought back veteran lineman B.J. Finney, a key signing as far as providing depth to the offensive line.

The bad: Pittsburgh has glaring holes at running back, cornerback and EDGE rusher after losing James Conner, Steven Nelson, Mike Hilton and Bud Dupree. The Steelers have to find a long-term replacement for center Maurkice Pouncey, who retired this offseason. Pittsburgh also needs depth at tackle and guard after letting Alejandro Villanueva and Matt Feiler hit the open market.

What still needs to be done: Three names that Steelers fans should know leading up to the draft include Alabama center Landon Dickerson, Oklahoma State offensive tackle Tevon Jenkins and Alabama running back Najee Harris. There’s a very good chance that the Steelers take one of these players with the 24th overall pick. Along with addressing these positions, the Steelers will also use some of their nine draft picks at cornerback, EDGE, offensive guard, defensive line and inside linebacker. Pittsburgh is also open to drafting a tight end who can complement Eric Ebron.

The good: The Bengals’ off-field moves have garnered more attention than anything they’ve done as it relates to roster moves. The team recently announced a new Ring of Honor while making changes to its uniform. On the field, the Bengals invested $60 million over four years in defensive end Trey Hendrickson. The Bengals further added to their defense with the signings of cornerbacks Chidobe Awuzie and Mike Hilton, a former division rival with the Steelers. To help protect Joe Burrow, Cincinnati added a veteran to the offensive line in offensive tackle Riley Reiff.

The bad: The Bengals have yet to sign a veteran receiver to replace A.J. Green. Cincinnati also should have done more to address their needs at EDGE and on the offensive line. Reiff and Hendrickson are good starts, but the Bengals will have to invest more in both positions via the draft.

What still needs to be done: Cincinnati will surely use the No. 5 overall pick to select either Oregon tackle Penei Sewell or LSU receiver Ja’Marr Chase. Fans also shouldn’t sleep on the Bengals taking Florida tight end Kyle Pitts if Pitts is still on the board. After that, the Bengals will likely address their pass rush before adding depth to the offensive line. Cincinnati is also in need of running back depth after losing Giovani Bernard to the Buccaneers.

The good: Baltimore kept some of its key in-house free agents in linebackers Tyus Bowser and Pernell McPhee along with defensive tackle Derek Wolfe. Baltimore’s best outside free agent signings include offensive guard Kevin Zeitler, a player the Ravens surely hope can be a better replacement for Marshal Yanda, who retired after the 2019 season. It also includes receiver Sammy Watkins, a much-needed addition to Baltimore’s receiving corps.

The bad: The Ravens suffered big losses with the departures of linebackers Jihad Ward, Yannick Ngakoue, Matthew Judon and center Matt Skura. They’re also bracing themselves for the likely departure of Orlando Brown Jr. after the two-time Pro Bowler expressed his desire to move from left to right tackle. The Ravens have also done little to address their needs at safety.

What still needs to be done: Baltimore has glaring needs at offensive tackle, linebacker, safety, EDGE and receiver. And while there are still some available free agents at each position, the Ravens will first try to fill these holes via the draft before going back out on the open market. Baltimore should find a draft pick to select a tight end who can be a viable option for Lamar Jackson in the passing game.

While receiver can’t be ruled out, it’s much more likely that Baltimore will use the 28th overall pick on defense. Two of our draft experts have the Ravens using the pick to select former TCU safety Trevon Moehrig. And while they will try to address most of their needs during the draft, look for the Ravens to sign more free agents over the next several weeks. One player who is reportedly on Baltimore’s radar is veteran left tackle Alejandro Villanueva, who was selected to two Pro Bowls while protecting Ben Roethlisberger’s blindside.