Home » All NFL » Why Julio Jones and Jimmy Garoppolo could soon be traded, plus biggest NFL draft busts of past 30 years 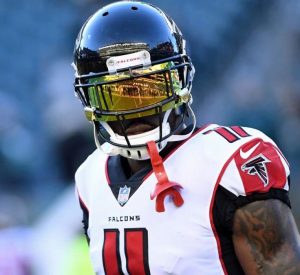 We’ve been counting down for so long that I was starting to think maybe the NFL postponed the draft without telling anyone. That seems like something they would do. However, that is not the case and the draft will be kicking off on Thursday, which means this newsletter is going to be jam-packed with draft content for the rest of the week. We’ll have so many mock drafts that our mock drafts will have mock drafts and we’ll make sure to include as many rumors as humanly possible.

With that in mind, let’s get to the rundown. As always, here’s your weekly reminder to tell all your friends to sign up for the newsletter. All you have to do is click here and then share the link.

After 10 straight weeks of having a Mock Draft Monday on the podcast, I have some sad news for everyone: Today is the FINAL Mock Draft Monday of the year. We thought about doing one next week to help prepare everyone for the 2022 NFL Draft, but we decided it would make more sense to let everyone mentally recover from the 2021 draft first.

Since today is the final Mock Draft Monday of the year, we decided do things a little bit differently: Instead of having one of our draft writers come on the podcast to explain their mock draft, we had all of draft writers come on the show TOGETHER to do a live mock draft. Basically, this means that draft gurus Ryan Wilson, Josh Edwards and Chris Trapasso all joined Will Brinson and the four of them went through the entire first round with each guy serving as the “general manager” for eight different teams.

You can see below how the first 10 picks of the live mock draft played out:

To find out how the rest of the first-round played out, you’re definitely going to want to listen to today’s show and you can do that by clicking here.

From now until the start of the draft on April 29, there are going to be a lot of rumors about the draft. As a matter of fact, over the next four days, you probably shouldn’t believe anything you hear and that’s because draft rumors generally go something like this:

For some reason, that’s how rumors work in the lead up to the draft and the closer to the draft you get, the crazier the rumors get.

With that in mind, let’s take a look at a few of the most recent rumors:

The moral of the story here is that I think this means there are going to be a lot of rumors between now and the start of the draft. And let’s not forget, sometimes there won’t even be any rumors about a trade before it happens, which is kind of what we got on Friday when the Ravens sent Orlando Brown and several draft picks to Kansas City in exchange for the Chiefs’ first-round pick. For the full details on that trade, be sure to click here.

3. Best bets for the NFL Draft

Today, those best bets are coming from our three draft gurus: Ryan Wilson, Josh Edwards and Chris Trapasso. Each of the guys came up with a few bets that they like going into the draft and I’m going share one bet with you from each guy.

If you want to check out the rest of their bets, be sure to click here.

4. NFL Insider notes: How the top 10 is going to play out

For the past 10 weeks, I think I’ve shared roughly 117 mock drafts with you from 14 different writers, but this week — since it’s draft week — we’re going add a twist and tell you how an actual NFL team thinks the first 10 picks in the draft will end up playing out.

CBS Sports NFL Insider Jason La Canfora chatted at length with an anonymous top exec from a team who is trying to get a handle on what the most likely outcomes will be from the picks in the top 10.

Here’s how the executive sees the first 10 picks playing out:

It’s interesting to see how an actual team executive sees the first 10 picks playing out, because it’s definitely different than the how we’ve seen the first 10 picks play out in most mock drafts. Basically, what I think this means is that no one really has any idea what’s going to happen on Thursday. The first two picks seem to be pretty set in stone, but after that, you should expect total chaos.

With the 2021 NFL Draft just around the corner, we decided to kick off a series last month that features the top draft picks of all time. The way this has been working is pretty simple: Since there are 32 picks in the first round, we went through and listed the top five picks for each one of those 32 spots. Our countdown started with the 32nd spot, and now, we’ve reached the top two.

Today we’re going to feature the top-five players who have ever been selected with the second-overall pick.

Cody Benjamin was in charge of putting this ranking together, so if you don’t like it, please complain to him. If you want to read a deeper explanation on the list, be sure to click here so you can check out Benjamin’s full story. On the other hand, if you’d like to yell at Cody on Twitter because you disagree with his list, feel free to click here.

6. Ranking the biggest draft busts over the past 30 years

When the NFL Draft begins on Thursday, every team will be hoping that their first-round pick turns into a future Hall of Famer, but the much more likely scenario is that they end up turning into a total bust.

Since everyone loves reading about busts, I decided to put together a list of the top-10 draft busts over the past 30 years. To make this list different than most draft bust rankings, I’ve decided to throw in one rule: To qualify for the bust list, you have to be at least a top-10 pick.

The other rule here is that I’m only going to list a maximum of one bust per team. If I didn’t make that a rule, then this list would basically only be made up of former Bengals, Browns and Lions draft picks, and as fun as that list would be, I don’t want to terrorize just those three fan bases.

With that in mind, let’s get to the list:

5. Lawrence Phillips, Rams (1996, sixth overall pick). Despite the fact that Phillips was accused of multiple crimes and suspended while at Nebraska, the Rams still decided to take a risk on him in the 1996 draft and that decision ended up backfiring in a major way. Once he got to the NFL, Phillips was unable to stay out of trouble and the Rams ended up releasing him before he even finished his second season with the team.

4. Charles Rogers, Lions (2003, second overall pick). With the second pick in 2003, the Lions knew they were going to take a receiver and with a pick that high, there were only really two options: Rogers or Andre Johnson. Instead of taking Johnson — who might end up in the Hall of Fame — the Lions decided to go with the hometown hero in Rogers, who went to high school in Michigan and attended Michigan State. Johnson ended up being selected by the Texans with the very next pick.

2. JaMarcus Russell, Raiders (2007, first overall pick). The Raiders only have themselves to blame for this pick and that’s because they basically ignored every red flag in the book when they selected Russell with the first overall pick in 2007. For one, an NFC general manager literally told Raiders owner Al Davis that taking Russell would be a bad idea. It was also well known that Russell hated studying. Russell also hated conditioning, which are two things you don’t want your top pick to hate.

1. Akili Smith, Bengals (1999, third overall pick). If you’re wondering how Smith beat out guys like Ryan Leaf and JaMarcus Russell as the biggest draft bust of all-time, there are two reasons. The first reason is that he was horrible during his time in Cincinnati and the second reason is because of what the Bengals gave up to draft him. Before they selected Smith, the Bengals had the chance to trade the third pick to the Saints in exchange for New Orleans’ first-, third-, fourth-, fifth-, sixth-, and seventh-round selections in 1999 (12th, 71st, 107th, 144th, 179th, and 218th), as well as New Orleans’ first-round pick in both 2000 and 2001, along with a second-round pick in 2002. The Bengals said no.

This is actually a list of the 10 worst draft busts and if you want to find out who else made the cut, be sure to click here.

7. The Kicker: Rob Gronkowski broke a Guinness World Record over the weekend

I think it’s safe to say that no one has had a bigger year than Rob Gronkowski. Not only did he win the Super Bowl back in February, but he added something even more impressive to his résumé over the weekend: He broke a Guinness World Record.

When I first read about this, I assumed the record was for most hours spent partying during a pandemic, but I was wrong, the record was for catching a football from a 600-foot dropping point. To break the record, someone flew a helicopter 600-feet in the air, then dropped a football down to Gronk. Although I’m pretty sure a football could kill you from this height, it did not kill Gronk, who ended up setting the record by caching the football on his third attempt. You can see the full video of Gronk’s catch by clicking here.

If I ever break a world record, it will be for most coffee drank while writing a newsletter, but I don’t think that’s an actual record, which is too bad.