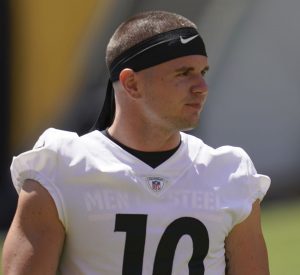 Switzer posted the latest Twitter update about Christian on Sunday, saying he’s having another transfusion after his hemoglobin dropped overnight. Switzer said doctors need to get the boy’s blood count up so he’s stable enough to undergo further testing.

Switzer asked his followers for prayers.

Earlier this week, the 26-year-old father posted a video thanking the public for its overwhelming outpouring of support for Christian, who underwent surgery last week after being hospitalized for bleeding. Switzer had said doctors still weren’t sure what was causing the bleeding.

Switzer wrote Saturday night that Christian had more “significant bleeding” and was back in the hospital.

“We’re frustrated but more so just exhausted seeing our son suffer,” Switzer wrote. “We’re asking for prayers for the doctors as they work to find a diagnosis & strength for Christian as he battles.”

Switzer spent last season on Cleveland’s practice squad. He was with the Pittsburgh Steelers for two seasons after being drafted by Dallas in the 2017 NFL draft out of North Carolina.