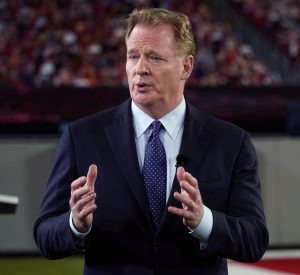 The NFL was forced to cancel public, fan-driven events for the 2020 NFL draft because of the onset of the COVID-19 pandemic. But the 2021 version on the weekend of April 29-May 1 is expected to be somewhat of a return to normalcy that the league had established previously.

The league announced Monday that the draft’s host city of Cleveland will feature a setup similar to years past, with stages spread out over the downtown area, including at the Browns’ FirstEnergy Stadium, the iconic Rock & Roll Hall of Fame and the Great Lakes Science Center.

Fans, media and select players will be attending. Fans in attendance at the event’s “Inner Circle” will be selected by the league’s 32 teams as team ambassadors and must be fully vaccinated. And yes, for those fans who missed out on the annual tradition of booing the pick announcements of NFL commissioner Roger Goodell, he’ll be back on-site in 2021.

NFL personnel won’t be in Cleveland but can gather wherever is deemed safe, whether it’s at their teams’ facilities or in another location that meets local guidelines.

“We are thrilled to be heading to Cleveland for the NFL Draft, which has become one of the most highly anticipated events in sports,” NFL executive vice president, club business & league events Peter O’Reilly said.

“Just months after executing a safe and successful Super Bowl LV, we look forward to bringing the excitement of our Draft traditions to fans in collaboration with the Browns, Destination Cleveland, Greater Cleveland Sports Commission, the City of Cleveland, and all of our local Cleveland partners.”

And as had been the case before the pandemic, there will be entertainment, including a large “Draft Experience” for fans, brand displays, musical performances and other attractions.

Safety measures will be in place, including mask wearing, social distancing and capacity limits. The league did not announce what the limits would be but did indicate that fans wanting to attend must make reservations through the NFL’s OnePass app, which will be available for download the week of March 29.

The event capacities haven’t been determined yet. According to a Sports Business Journal report, local authorities are planning to shape guidelines in the coming weeks, armed with the latest COVID-19 data.

However, the league clearly expects “many thousands’ of attendees to be permitted in the open-air venues. That includes the fan locations at the outdoor Draft Experience at FirstEnergy Stadium, the Great Lakes Science Center and the Rock & Roll Hall of Fame.

The NFL plans to use the event as a pro-vaccination pulpit, limiting the indoor attendees to fully vaccinated fans. The league also will embed a mandatory COVID healthy survey on its app where reservations are required.

“We have been characterizing it as a ‘large, live, in-person event,’” Greater Cleveland Sports Commission CEO David Gilbert told SBJ.

Added O’Reily to SBJ: “This draft in particular feels like it represents hope beyond that, because we hope to role model and showcase a bit of what a brighter future continues to look like, in terms of being able to do live, in-person events safely.”

The expectation is that the event could be the biggest American sporting event since the pandemic hit and the largest the city has seen since the 2016 Republican Convention.

Attendance numbers for that event are unverified, but it included an estimated 50,000 visitors to the city of more than 330,000 people, along with nearly 2,500 delegates, more than a thousand registered protestors and hundreds of law enforcement officials and other security detail on hand.

Back in February the league pulled off a semi-public Super Bowl LV in Tampa, which included 25,000 fans in attendance at Raymond James Stadium for the game.

Ohio governor Mike DeWine recently said that sports teams could allow up to 30 percent of fans in stadiums this spring under a pandemic-related plan for sports. Many sporting events in the state permitted 15 percent or less capacity last year.

The 2019 NFL draft smashed attendance records for the increasingly fan-driven event, reeling in an estimated 600,000 public observers. Similar festivities were planned for last year’s draft, which was set for Las Vegas, prior to the pandemic forcing the cancellation of those events and turning the 2020 NFL draft into a virtual event.

It’s highly unlikely that the 2021 NFL draft will come anywhere close to reaching Nashville attendance marks. But it’s also clear that as the league moves forward, it hopes that the 2022 NFL draft — which was given to Vegas again — could do just that.