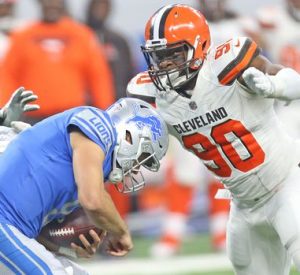 CLEVELAND, Ohio – Myles Garrett as inspiration can be a powerful thing. Takk McKinley made that clear during his introductory press conference with the Browns.

After four seasons with the Falcons, the edge rusher taken 25 picks after Garrett in the 2017 draft sounded excited about the prospect of playing opposite Garrett.

McKinley had 13 sacks in his first two seasons – 14 if we’re counting the playoffs – but only 3.5 in 2019 before a groin injury limited him to four games last season.

While McKinley got 511 fewer snaps than Garrett did in their first two seasons, they were similar when measured by Pro Football Focus’ pass rush productivity metric. PRP measures how often a rusher pressures the quarterback on a per snap basis, with more weight given to sacks.

Then in 2019, McKinley and Garrett went their separate ways.

Keeping McKinley at that rate for an entire season while Garrett returns to his 2019 form would give the Browns quite a pass rush. The only teams to have edge rushing duos each with PRPs above 8.0 last season were the Chargers (Bosa, Uchenna Nwosu) and Cardinals (Markus Golden, Haason Reddick).

The Browns want more production than that opposite Garrett. They were ranked 24th in pressure percentage last season (21.9 percent). They were 30th in blitz percentage, meaning Joe Woods’ defense required getting pressure with its front four.

The common theory is that pairing an edge rusher with Garrett will make life easier for that edge rusher. After all, Garrett grabs most of the attention from an offense. That should helpclear a path to the quarterback from the opposite side of the field.

The problem with that theory is that it hasn’t exactly worked yet.

Ogbah was a second-round pick of the Browns in 2016 and became an immediate starter. He had 5.5 sacks as a rookie along with a team-high 46 pressures. That included 10 quarterback hits.

All that came on 460 pass-rush snaps, which was 10th-most among edge rushers, creating a PRP of just 5.7. But it was 6.9 when rushing from the left (against right tackles), which is where Ogbah moved to almost exclusively the next season when Garrett arrived.

His PRP from the left was over 8.0 in both seasons since leaving the Browns.

Vernon had three double-digit sack seasons and two 80-plus pressure seasons on his resume by the time the Browns traded for him in 2019. While he was coming off a Pro Bowl season in 2018, Vernon’s pressures and sacks fell off as he missed nine games over his final two seasons with the Giants.

But his PRP fell below 7.2 just once from 2015-18, proving that he was still producing when healthy.

What did Garrett do for Vernon’s production?

But last season, Vernon’s numbers dropped to 6.1 overall and 5.8 from the right in games Garrett played.

While Vernon saw a jump in his production from the right side in 2019, his overall production remained fairly flat compared to his pre-Browns career.

Just because Garrett’s previous running mates were more productive before or after the Browns doesn’t mean McKinley can’t reach a new level opposite Garrett.

As Doug Lesmerises pointed out recently, Garrett’s rise over the past four seasons could prove motivational for a player like McKinley. Garrett was still finding his way when he played with Ogbah. And Vernon was a seven-year vet with his own accomplishments by the time he arrived in Cleveland.

Perhaps McKinley is the perfect fit at the perfect time, an untapped talent ready to reach his potential as Garrett chases the defensive player of the year award.

“I am not a rookie in this league anymore,” McKinley said. “Myles and I were in the same draft class. I am considered a vet now. For me, there is no more excuses. Why this? Why that? It is ‘Get the job done’ and leave it at that. I am very excited to be able to team up with Myles, Sheldon Richardson and this defense and continue to get better and continue to improve.”

If the Browns want to improve on their pass rush in 2021, he will probably have to.