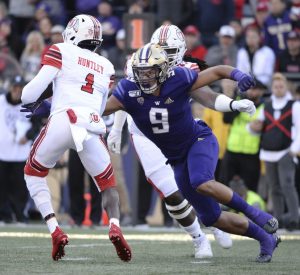 The NFL recently released the official selection order for the 2021 NFL Draft, which will take place April 29 to May 1 in Cleveland.

The Cleveland Browns did not receive any compensatory picks in this year’s draft, so for now they will head into the weekend holding the following nine selections:

It will be surprising if general manager Andrew Berry uses all nine of those selections as the team’s roster is not set up to absorb nine rookies in one year.

Related: Renderings and plans for 2021 NFL Draft in Cleveland unveiled

So with that in mind, and knowing what the Browns have done so far in free agency, let’s take a quick run through some mock drafts to discover who could hear their name called when the Browns make their first-round selection in front of the hometown fans.

Zaven Collins, LB, Tulsa – Browns general manager Andrew Berry is having a nice offseason, adding help on defense and getting impact players in the secondary in safety John Johnson III and cornerback Troy Hill, both former Rams. And the way this draft is shaking out, there could still be solid defenders available late in Round 1. If Cleveland can find a pass-rusher to put opposite Myles Garrett, that’s a huge win, which is why I considered Oklahoma’s Ronnie Perkins and Texas’ Joseph Ossai here. But Collins is a versatile defender who could play linebacker or defensive end, and I like his fit with the Browns. Get him on the field and watch him make plays.

Jayson Oweh, DE, Penn State – Jayson Oweh is a different caliber of athlete from even the other freaks in the class. With his length and get-off, he doesn’t need much more to make an impact. He’s relatively new to the game, and we saw massive improvement from him from 2019 to 2020 despite what his sack totals say.

Jaelan Phillips, DE, Miami – There are mixed reviews on Jaelan Phillips, with concerns about medicals, but he can get after the passer and has rare size and length off the edge.

Kyle Crabbs at The Draft Network:

Kwity Paye, DE, Michigan – The Browns have been impressive with their strategy in 2021 free agency—at least from afar and before we get to see their new additions on the field. But a pass rusher opposite Myles Garrett is still a missing piece. Kwity Paye is going to check boxes for his size, density, explosiveness, and agility; I’m betting the Browns would make their own bet on his athletic tools if he’s there at No. 26 overall. The only downside is a transition from the University of Michigan to Buckeyes country.

Vinnie Iyer at The Sporting News:

Levi Onwuzurike, DT, Washington – Levi Onwuzurike has emerged as the second-best defensive tackle in this class for similar backfield-disrupting attributes as Barmore. He has great quickness and athleticism for his size but he also maintains his big-body strength against the run. The Browns could use him inside for both an improved pass rush and run-stuffing.

Zaven Collins, LB, Tulsa – If the Cleveland Browns truly want to contend for a Super Bowl, they will need to improve on defense. Bringing in another pass rusher opposite Myles Garrett is a good start. Tulsa’s Zaven Collinsis fast, with a great burst that allows him to get to the ball quickly.

Zaven Collins, LB, Tulsa – For the 2020 season Collins had four sacks, four interceptions (including two pick-sixes) and two forced fumbles. At 6-foot-4, 260 pounds, he looks more like a defensive end but moves with the fluidity of the modern day inside linebackers that have become so prevalent around the league.

What do you think, Browns fans? Does one of the players mocked to the Browns get you going? Or do you have your eye on someone else?

Let us know in the following poll and have your say in the comments.

Who should the Browns select in the first round?