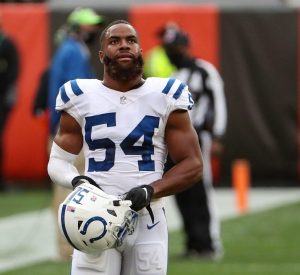 New Cleveland Browns linebacker Anthony Walker made no bones about it. He wants to win a Super Bowl, and he believes joining the Browns as a free agent was the easy and obvious best path to making that happen.

Walker made that clear in his introductory press conference, conducted via Zoom on Monday.

“We play this game to win the biggest trophy in it and that is winning the Super Bowl,” Walker said. “That is my No. 1 goal. It will always be my No. 1 goal.”

“The next part of that would be to help us become the No. 1 defense in the NFL and whatever that takes. Whatever happens after that, it is all gravy. I want to win and that is why Cleveland is the place I chose.”

Walker started for three seasons in Indianapolis, averaging well over 100 tackles in each of those three years. He’s just 25, consistent and productive as a run defender and short-range zone defender. On a one-year deal, Walker has a chance to help a talented young Browns roster advance beyond last season’s trip to the AFC divisional round.

Malik Jackson: What the Browns are getting in their new DT