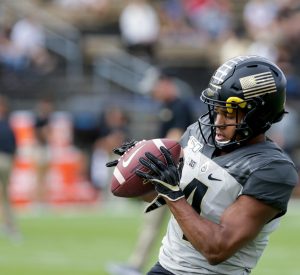 Most of the NFL scouting eyes are in Tuscaloosa for Alabama’s pro day, but those who paid attention to what’s going on in West Lafayette, Indiana, got a treat as an appetizer on Tuesday. The Purdue Boilermakers held their pro day, and two prospects solidified their status as worthy of consideration for the Cleveland Browns in the 2021 NFL draft.

Moore fits the definition of a “pocket rocket”. He measured in at just 5-foot-7, but Moore proved the dynamic athleticism and swole physique he showed on the field at Purdue were no fluke. He ran a 4.29 40-yard dash and elevated for a 42.5-inch vertical jump, among his prodigious athletic feats on Tuesday.

Moore projects best as a slot receiver who can also line up in the backfield. At his height, it’s tough to see him being in play for the Browns in the first round, but if he’s still there amidst a crowded WR class in the second round, Moore needs to be in consideration for GM Andrew Berry and the Browns.

Barnes is a middle-round talent at linebacker but he’s the type of LB the Browns need:

He proved at Senior Bowl practices he has the instincts and range to handle coverage duties in the NFL. Barnes would make a solid pick for Cleveland with one of its two third-round picks.