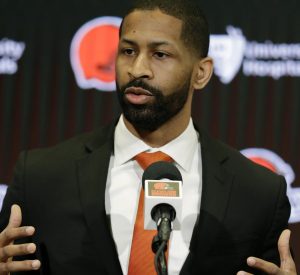 Head coach Kevin Stefanski endeared himself to Cleveland Browns fans in 2020 with the most successful season since the franchise came back in 1999. General Manager Andrew Berry is winning them over with his second consecutive successful offseason.

Berry was a big spender in free agency last season. The Browns got better by adding Austin Hooper and Jack Conklin to the offense, giving Stefanski additional tools to build an offense that gave the Browns a chance week in and week out.

This year, the spending has been focused on the defensive side of the ball but the hope is that it will once again lead to notable differences.

With the first wave of free agency through and a handful of impactful decisions made by the front office here’s a look at how Cleveland is doing so far.

The Browns’ highest-dollar signing is one that’s hard not to love. Former Rams safety John Johnson III is a perfect convergence of need, long-term fit and value at the price they paid for him.

First, the Browns needed safety help. Veterans Andrew Sendejo and Karl Joseph were brought in to provide veteran leadership and play while Grant Delpit developed into a starter. Instead, Delpit missed the season with a torn Achilles while Sendejo and Joseph were liabilities in the secondary.

The team traded for Ronnie Harrison who wound up being the ninth-highest graded safety by Pro Football Focus. The addition of Johnson III, who was ranked third by the site, takes a position grouping that was a weakness and turns it into an undeniable strength.

They did it without overspending too. The contract makes him the eighth-highest paid safety in the league, which isn’t cheap but it’s far from an overpay.

Ideally, a team would like for a player to actually outperform their compensation. Most of the time when it comes to big money free agents, it’s not a realistic goal. For Johnson’s contract, there’s a strong chance he outperforms many of the safeties who are rated above him according to salary.

When Joe Woods took over the defense in 2020, he said he wanted to get to the point where the Browns could run dime defense (with four linemen, one linebacker and six defensive backs).

“I would like to transition into a dime system, but it is going to be something that is going to take time to get into, just because of getting their reps,” Woods said, per Jeff Risdon of Browns Wire. As it turns out reps weren’t the only problem to making that happen, they didn’t have the personnel either.

After picking Johnson III up from the cash-strapped Los Angeles Rams, the Browns again looked to the West Coast when they signed Troy Hill. His addition makes Woods’ vision of a dime base defense closer to reality.

Hill brings incredible versatility to the secondary. He played 49.9 percent of the snaps in the slot last season, according to Player Profiler. That’s where he is at his best but he also spent some time on the outside.

Hill’s coverage was incredible last season. He was 10th in the league in passer rating allowed according to Player Profiler while seeing 107 total targets in the vaunted Rams secondary.

Once again the Browns got an incredible value. Hill will cost them just $1.9 million in 2021 with a potential out in 2022 if things don’t work out. Seems unlikely that will be the case, but it’s just an added benefit to this move.

The secondary isn’t the only unit on the defense that needs an infusion of new talent. The defensive line falls into that category and pre-free agency it looked like the Browns would have plenty of opportunity to add a difference-maker to pair with Myles Garrett on the edge.

Those options quickly evaporated without much news on the Browns front. Carl Lawson, Trey Hendrickson, Yannick Ngakoue and Bud Dupree all got big contracts from new teams while the Browns stood pat.

Ultimately, they addressed the position but with a fairly high-risk flier. They signed Takkarist McKinley to a one-year, $4.25 million contract.

Their interest in McKinley shouldn’t come as a surprise. Ian Rapoport of NFL Network reported the Browns put in a claim for him three times when he was put on waivers by the Atlanta Falcons last season. He was originally claimed by the Bengals, then the 49ers before winding up on the Las Vegas Raiders roster.

McKinley played in just four games last season with the Falcons. An injured growing kept him off the field and was the reason he was put back on waivers by the Bengals. However, he’s been underwhelming with diminishing sack totals in each season since his second year.

In the past two seasons he has notched 4.5 sacks. That’s fine for someone who is being brought in to be a cheap edge-rusher. He has a first-round pedigree and the possibility of untapped potential playing alongside Myles Garrett.

But as a fix for the pass-rush compared to the other options that were available. He’s a little underwhelming and a definite sign they will need to address the position in the draft.