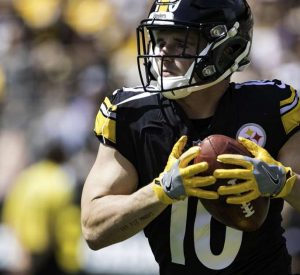 After a readmission to the hospital due to significant bleeding issues, the 9-month-old son of Cleveland Browns wide receiver Ryan Switzer is being transferred to a hospital in Boston.


© Provided by Yahoo! Sports
Christian Switzer has requested prayers as doctors try to figure out what is happening to his son. (Photo by Mark Alberti/Icon Sportswire via Getty Images)


Switzer tweeted Wednesday that the doctors in Boston “have a plan in place” to find the source of his son Christian’s bleeding through various tests, and that he’s encouraged after speaking with a doctor in Boston:

I am encouraged by the confidence and clarity in the voice of the Doctor we spoke with in Boston about the potential solution to Christian’s issue. We remain grateful and appreciative of everyone who’s given our family strength during this time. No prayer has gone unheard.

Christian Switzer was first admitted to the hospital on March 6 after his parents found him with a diaper and crib soaked in blood the morning after he had tested positive for COVID-19. He received multiple blood transfusions and underwent surgery during a stay at the NICU. Switzer was later discharged, only to return to the hospital 10 days later when he again encountered significant bleeding.

Doctos still don’t have a clear answer on what is causing Switzer’s issues, and hopefully the tests in Boston can finally shed light on the issue.

The news and updates about Switzer’s conditions led to an outpouring of support for the Switzer family, for which Ryan Switzer has repeatedly thanked fans and well-wishers.

Christian is the first child of Ryan and his wife Gabie. The 26-year-old Switzer has been in the NFL since 2016, when the Dallas Cowboys drafted him out of North Carolina. Switzer is currently a member of the Cleveland Browns organization after signing onto the team’s’ practice squad after the Steelers waived him last season.