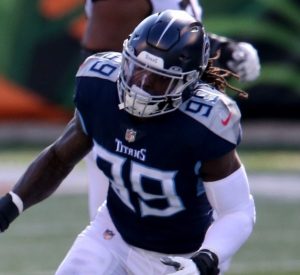 CINCINNATI — The Browns are hosting Jadeveon Clowney for a free agent visit on Wednesday according to Field Yates of ESPN.

Clowney is arguably the best defensive end on the market. Cleveland tried to sign him last offseason, but he decided to go to Tennessee.

The 28-year-old only appeared in eight games for the Titans, finishing with 19 tackles and zero sacks. He underwent surgery in November to repair a left meniscus injury.

The three-time Pro Bowler would get a chance to play on the opposite side of Myles Garrett. If the Browns land Clowney, then it’ll be the cherry on top of what has been a productive free agency period for the organization.

They gave their secondary a boost with the additions of cornerback Troy Hill and safety John Johnson. They’re arguably the best team in the AFC North.

For the latest free agency news and NFL Draft coverage, bookmark AllBengals and check out some of our other articles below.

An Open Letter to A.J. Green

EXCLUSIVE: A.J. Green Looks to Revitalize His Career in Arizona

Be sure to keep it locked on AllBengals all the time!