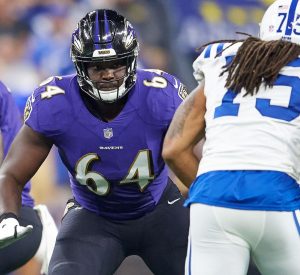 Browns’ GM Andrew Berry had a plan. He inscribed what the issues were with the roster last season and was determined to find solutions beginning with free agency.

Two of those positions he identified was defensive tackle, and swing tackle.

Being patient and deliberate, Berry this past week signed DT Malik Jackson from the Philadelphia Eagles and then Dallas Cowboys OT Greg Senat. Do these two players come into the fold as potential starters, or as needed depth?

The name Greg Senat may ring a bell with Browns’ fans. He was with the franchise for one month last season as a member of the practice squad and one of the final players added to this group.

He was then claimed by the Cowboys in early October when their starting right tackle La’el Collins began having hip issues and ended up on IR to return. Dallas LT Tyron Smith had missed two games as well, so depth was needed and Senat was chosen as the backup to the backups.

Senat (6’-6”, 305 pounds) is just 26 years old and was taken in the sixth-round of the 2018 NFL draft by the Baltimore Ravens. He was named the starter in a preseason game against the Miami Dolphins, but left the game early with a foot injury. After the game, Senat tweeted himself wearing a walking boot on his injured right foot to which ESPN picked up and published.

The self-pic angered Ravens head coach John Harbaugh who, when questioned about Senat’s injury despite no official notice from the club stated, “He’ll be disciplined for that. So, I’ll make sure that we take care of that.”

The toe injury required surgery and he was placed on season-ending IR. Senat came back to camp healthy the following season and made the final 53-man roster but was waived when the club picked up CB Maurice Canady. The Ravens had plans to add Senat to their own practice squad.

He was grabbed up by the Kansas City Chiefs and added to their roster as the second backup to LT Eric Fisher. Senat spent six weeks on their active roster before landing once again on IR. The Chiefs won the Super Bowl that season and Senat now adorns a ring despite not playing a single down in an actual game.

Senat was perceived to be a reserve tackle for the Chiefs last season but was cut before the 2020 season began and picked off waivers by the Browns. One month later, the Cowboys claimed him as offensive line insurance. He played in 10 games for Dallas, but only blocking on special teams and netted just three snaps as an actual tackle with the offense.

He comes to a Cleveland offensive line that is almost certainly the best group in the NFL. Tackles Jack Conklin and Jedrick Wills proved to be durable last year, but the interior players had some issues with remaining healthy. OT Kendall Lamm was allowed to test the free agent waters and signed a two-year deal with the Tennessee Titans, so another swing tackle was necessary to co-habitat with Chris Hubbard and Alex Taylor. No timeline has been given in terms of recovery for Hubbard from the dislocated knee which ended his season last year.

Terms of the contract have not been disclosed but is expected to be a one-year deal. Senat offers developmental upside to serve as a reserve tackle.

The Browns knew that starting leftside DT Larry Ogunjobi wasn’t going to be re-signed and made no attempt to keep him. That leaves a hole on the defensive line. But, does it?

Andrew Billings (6’-1”, 328 pounds) was signed in free agency last year to be quality depth behind Sheldon Richardson. A former fourth-round pick of the Cincinnati Bengals in 2016, Billings had started 37 games for Cleveland’s division rival. While with Cincy, he had 80 total tackles, 12 QB hits, 14 tackles for loss and 3.5 sacks.

The thought process for GM Berry was to bring in a solid, dependable player who had quite a bit of NFL starts to be not only depth but an athlete that can come in during each game and provide some breathing room for Richardson. Billings (age 26) is a very good run stuffer. He had a knee injury in his rookie season, but since had been very durable. For 2020. he was a pandemic opt-out.

In the 2020 NFL draft, Berry traded up in the third-round with the New Orleans Saints in order to take Jordan Elliott from Missouri. Elliott (6’-4”, 302 pounds) ended up with only one start, but played in all 16 games last year. He progressed during the season ended up with 15 tackles, but more importantly showed that he can compete for Ogunjobi’s vacant position.

And now Berry has signed seasoned veteran Malik Jackson. Will he take the slot beside Richardson, or is he viewed like Billings was last year as simply quality depth?

Jackson (6’-5”, 290 pounds) was taken in the fifth-round of the 2012 NFL draft by the Denver Broncos after an exceptional college career at Tennessee and attended the Senior Bowl. In high school, Jackson was named Cal-Hi First Team All-State.

In that victory in the first quarter after an early field goal, Denver scored the game’s first touchdown by Jackson who recovered a fumble in the end zone after LB Von Miller strip-sacked Carolina Panthers QB Cam Newton.

Jackson parlayed that year’s success into signing a huge six-year $85.5 million contract with the Jacksonville Jaguars who were known for a stout defense. In 2017, he was named to the Pro Bowl as Jacksonville went 10-6-0 with a defense that only allowed 268 points. The Jaguars captured the AFC South Division, then defeated Buffalo and Pittsburgh in the playoffs before losing to the New England Patriots 24-20 in the AFC Championship Game in a game in which they were leading by 10 points midway through the fourth quarter.

The following season, the bottom fell out for Jacksonville as they plummeted to a 5-11-0 record. Jackson was waived due to salary cap issues along with five other high-priced veterans.

Jackson started 42 of 48 games played in three seasons with the Jaguars and registered a career-high eight sacks during his 2017 Pro Bowl season. He finished his Jaguars career with 105 tackles, 18 sacks, four forced fumbles and seven passes defensed. He started his first 42 games with the team before playing the final six games in 2019 as a reserve.

The Eagles signed him to a three-year deal for $30 million to team up with Fletcher Cox. In his first game, Jackson suffered a foot injury and landed on season-ending IR. On March 17, Philly cut him.

The assessment on Jackson is that he is still a great player and tough as nails. He was once one of the best pass-rushing interior defensive linemen in the game. Now, he hasn’t played any significant role with a club since Week 10 of the 2019 NFL season.

His age has cut down his effectiveness and certainly will see a reduced role as a primary backup. However, he should bring a reliable source of pressure and could become a valuable, experienced piece in the defensive line rotation. The most likely to supplant Ogunjobi is Billings with a very hard push from Elliott.

Jackson’s agreement with the Browns is a one-year deal for $4.5 million. DC Joe Woods was the DB coach with the Broncos in 2015 when Jackson got his first chance as a starter in that Super Bowl winning year.