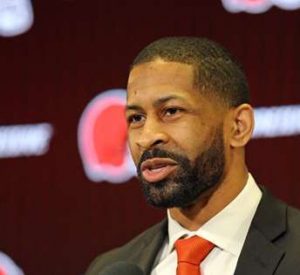 
The Browns’ top target in free agency, Berry described Johnson in a release provided by the team as a player who “doesn’t usually make it to the free-agent market.”

Johnson, signed to a three-year deal worth $33.75 million, will start at safety opposite 2020 second-round pick Grant Delpit if he’s 100%, and alongside Ronnie Harrison as well in three-safety packages.

“We thought he was one of the more versatile safeties in the NFL,” Berry said. “He can play free safety, strong safety and he can play in the box in the nickel or dime. His breadth of skills that he brings to the table, that he can play man coverage, he can play center field, he can support the run and really do everything at a pretty high level. It’s perfect for what we want to be as a defense.

Here’s what Berry had to say about the other free agents the Browns signed:

“We view Takk as a young edge player with a very high motor. He’s got speed, he has power and he has quickness. He really plays with his hair on fire,” Berry said. “He had a really strong start to his career, and I know the past couple years he’s dealt with a few injuries, but we think his playing style and skillset marries really nicely with what we look for out of our defensive ends in this system, and he’s a guy we think really has a ton of upside and fits nicely with what we want to do on the defensive line.”

“Troy is a versatile corner that has played inside and outside. He’s a smart football player who can play man coverage, zone coverage, turn the ball over and is a sound tackler,” Berry said. “We all viewed him as a really big part of the defensive success in Los Angeles this past year, and for us, the ability to have a corner that can play at a high level on both the outside and inside gives us a lot of flexibility with who we currently have on the roster and who we may add moving forward.”

“The name of Anthony’s game is really speed and instincts,” Berry said. “He is one of the fastest linebackers in the league. He’s a very quick processor and is very smart. We think he’s a guy whose range and tenacity fits really well with how we view the modern day linebacker. We also think that he’s a good cover guy, specifically with his ability to match running backs out of the backfield.

“Much like John Johnson, on top of that, he has a level of veteran experience. He called the defense in Indianapolis and he’s played MIKE and WILL. He’s an exceptional human being both on and off the field and will have a really strong presence in our locker room.”

“Malik is a self-made defensive tackle who had been with Joe Woods in Denver before as well,” said Berry, who overlapped with Jackson for a season in Philadelphia. “What we like most about Malik is his ability to impact the quarterback as an interior rusher. He played three-technique and has played what we call “the Big End.” But what we love about him is his length, quickness and tenacity as an interior rusher to give us more of a presence in passing situations over guards and centers.”

“He’s a very physically gifted tackle who is still new to the sport. We thought he made a lot of progress on our practice squad last year and we tried our best to retain him when Dallas signed him to their active roster,” Berry said. “We feel fortunate that we’re able to get him back with Bill Callahan and Scott Peters and add him to the mix to compete for our fourth tackle job. We think he’s a very physically gifted guy. He’s very studious and is a hard worker, and he fits the profile for guys that usually do well for us.”

“We’re all very thrilled to get guys like Rashard, Malcolm, JoJo (Natson) and Cody and guys like that back because it doesn’t always work out that way,” Berry said. “Those guys played a major role for us last year, and we look forward to the role they’ll play for us in 2021.”