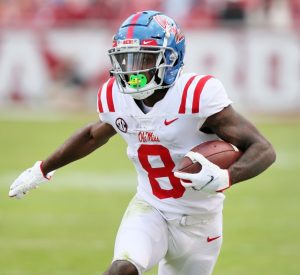 With the 2021 NFL Draft approaching, the Cleveland Browns will have their own tastes and board based on what they are trying to do in every phase of the game. Based on what is known about what they want to do, some prospects stand out as fits including Elijah Moore, wide receiver from Ole Miss.

The 40-time is pretty immaterial. So long as Moore ran faster than 4.5, he was going to be fine. His jumps are fine, but what stands out is his 3-cone. Beyond hip flexibility, it also is an indication of balance, which Moore showcases on the field. Getting under a 7.0 was realistically all he needed.

The most important aspect of Pro Day for Moore was simply getting measured. He’s more than tall enough and pretty dense.

More posted elite production for two different head coaches in two different systems, putting up prolific numbers against some of the best competition in the country.

Moore displays incredible athleticism on the field, understands how to create separation and is one of the best pass catchers in the country. He’s fearless in traffic, running over the middle and makes difficult catches through contact, able to occasionally absorb the hit maintaining his balance and continue running.

He’s a dynamic threat after the reception, will run through contact as well as make the opponent miss and is difficult to catch with a running start. Moore has excellent change of direction ability and can operate in tight spaces.

Moore has been incredibly dangerous running slot fades and does a nice job of using his body and strength to box opponents out while tracking the ball. He has great hands and can high point, playing bigger than his size would suggest.

Plenty will suggest Moore is a slot receiver, but he’s been productive on the outside and there’s nothing to suggest that he can’t do that in the NFL consistently. He’s got quick feet and strength to fight through contact.

This is even less of a concern for the Browns as with their tight end heavy scheme, they can line a player like Moore out wide off the line of scrimmage, so they can motion him to create favorable matchups or just give him a running start.

One of the things that stands out about Moore is despite the fact he was in Lane Kiffin’s offense for only the one year, he was smart enough to know the offense to a point where he could line up just about anywhere on the field. Out wide on the boundary, in the slot or even in the backfield with all kinds of motion to put him in the best position to create yardage.

Watch just about any Ole Miss game and keep track of the different ways he is utilized. Kiffin’s offense makes it easy to imagine the different ways that a head coach like Kevin Stefanski could utilize a player like Moore. Kiffin previously coached at Florida Atlantic University, the school from which the Browns selected Harrison Bryant in the 2020 NFL Draft. Although the position and utilization was different for Bryant, the thought process was the same; find ways to get him the ball and maximize him.

Despite an infamous touchdown celebration which helped cost the previous head coach at Ole Miss his job, Moore is more one of the more well prepared as well as polished receiving threats that will be available in the NFL Draft and he’s not even 21 years old.

Where the Browns Might Select Him: Just on his production, age and what he’s done on the field, Moore has a strong case to be a first round pick, so were the Browns to select him at 26, it’s entirely defensible. However, wide receiver continues to be a position that always has excess supply and as a result, he’s more likely to be a top 50 selection with a small chance of lasting until the Browns pick in the second round.