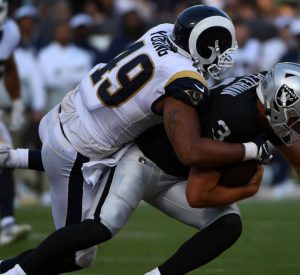 Friday, the Cleveland Browns announced they were waiving defensive end Trevon Young. The former sixth round pick from the 2018 NFL Draft by the Los Angeles Rams, Young has spent parts of the last two seasons with the Browns.

He was originally signed to the Browns in 2019 as a member of the practice squad for the final four weeks of the season. Young was then signed to a futures contract that offseason.

Young was waived during the 2020 season with an injury designation and when no one claimed him, he reverted to the Browns injured reserve list.

The Browns have a number of young edge rushers coming back in addition to what might be further investment in the upcoming NFL Draft.

Curtis Weaver was a rookie last season waived by the Miami Dolphins with an injured foot. The Browns claimed him and put him on their injured reserve. They also have George Obinna, who was an undrafted rookie last year.

That’s not including Cameron Malveaux and Joe Jackson, who both played at points last year for the Browns.

Young, 25, may not have had a chance to really get any reps with the Browns and now has an opportunity to go elsewhere to compete for a job.

Young has not been on the active roster or appeared in a game for the Browns since he’s been with the team. He appeared in two games with the Rams in his rookie season.