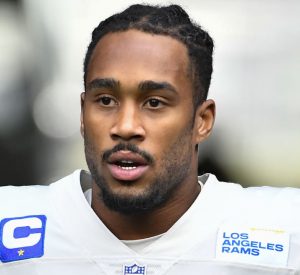 With the salary cap shrinking significantly this season, a few teams seized an opportunity to capitalize and plunder a market primed to be pillaged.

The Cleveland Browns were one of the teams who believe they landed a player who otherwise wouldn’t have been available in any other year.

“We thought he was one of the more versatile safeties in the NFL,” Berry said, via the team’s official website. “He can play free safety, strong safety and he can play in the box in the nickel or dime. His breadth of skills that he brings to the table, that he can play man coverage, he can play center field, he can support the run and really do everything at a pretty high level. It’s perfect for what we want to be as a defense.

The Browns signed Johnson to a three-year contract worth $33.75 million.

Berry is correct in that the 26-year-old is a player the Los Angeles Rams would have liked to retain in a normal season. With L.A. up against the salary cap and eating more than $22 million in dead money from the ﻿Jared Goff﻿ trade, it wasn’t in the cards.

Johnson can play both safety positions, is exceptional in coverage and can crash the line of scrimmage. He’s an ideal playmaker in today’s game. Johnson played a key part of the NFL’s top defense last season, compiling one INT, eight passes defended and 105 tackles.

The Browns haven’t splurged much on the open market this season, but an addition like Johnson can be one that has a significant impact when the season starts, even if it doesn’t make a ton of national headlines in the spring.

“The general mindset entering free agency any year is to try to be opportunistic and address improving all areas of the roster,” Berry said. “I think we were in a position where we had enough flexibility from a cap perspective where if we felt there was a player who aligned with our needs, if their skillset matched what we want to do within our scheme and they fit the profile of smart, tough, accountable, young, durable, then we can go aggressively and attack that player.

“We were able to do that with John Johnson III, but really even after that, I think a lot of the free agent activity and how we navigate the free agent market is to try to be opportunistic buyers. I think that’s something we were really able to accomplish with the guys we added.”