Home » Cleveland Browns » Just so we’re clear, the Browns legitimately could win it all this season — Doug Lesmerises 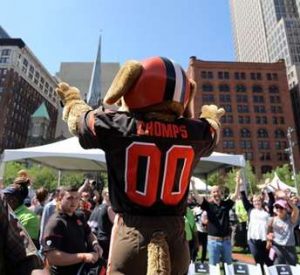 CLEVELAND, Ohio — It’s currently being shouted in Las Vegas this weekend at a bachelor party for the man who coined the phrase, but the first time that Jason Kapcar really remembers saying, “Super Bowl, Super Browns,” with his friends was in October 2002.


Browns quarterback Tim Couch was knocked out of a game against the Baltimore Ravens by a concussion, on a night when the fourth-year quarterback angrily admonished fans for cheering his injury. But for Kapcar, Andy Butts and Will Manzeo, there was only a lament. They spoke four sad, wistful words that lived in opposition to reality.

“It was just kind of an off-hand comment,” Kapcar said.

Over the last 19 years, with varying inflections and decibel levels, those four words have been mumbled and shouted, often accompanied by a round of shots, sometimes covering familiar despair. It was adopted by a radio show, and now with Butts preparing to get married later this spring, Kapcar, Manzeo and other friends are in Vegas for the Butts bachelor party right now, shouting with abandon the phrase that Butts first spoke aloud in this group. In the first 24 hours of the trip, Kapcar, in a phone interview from Vegas on Friday, estimated “Super Bowl, Super Browns,” was chanted at least 50 times.

They began as Andy’s words. The guys want the words to belong to all Browns fans. But first, let’s be clear about something. This is my dad instinct kicking in, the need to state the obvious to ensure that everyone is on the same page. I’d rather say it and be laughed at than not say it and leave any confusion.

Everyone knows the Browns absolutely are trying to win the Super Bowl right now, this year, and it totally could happen, right? There is nothing left to build toward and there is nothing holding them back. It’s here. It’s now. You know that, correct?

Kapcar, for one, isn’t sure everyone does know it.

“I think people are underestimating how strong of a contender we are,” said Kapcar, a 36-year-old Browns season ticket holder who lives in Cleveland.

With a natural lean toward analytics, Kapcar is a big believer in general manager Andrew Berry. But we’re long past the analytics debate around the Browns. There’s no more disagreement over roster building strategy because the team is built.

“We’re not a team that got lucky to be here,” Kapcar said. “This is legitimate. There’s staying power to this.”

The staying power is true, but so is the now power. This season doesn’t have to be Super Bowl or bust, but this certainly could be one of the best shots at a championship that the Browns will get in this era. They’re at a point with their young talent where they were able to add players this offseason without losing any players they wanted. Extensions for their young core are on the horizon, but they aren’t yet salary cap-crunched.

A year ago, they had 26 players who played regular meaningful minutes and earned a grade of at least 60 from PFF. Of those 26, 23 are back for 2021. The only ones missing are injured defensive end Olivier Vernon, and linebacker B.J. Goodson and cornerback Terrance Mitchell, who were replaced by players the Browns liked more. In free agency, they added four more players who graded out at least 60 last season, led by safety John Johnson III. Plus, the secondary should be inflated by the return from injury of Grant Delpit and Greedy Williams. And the Browns still may add another key defender.

According to PFF, the Browns rank fifth in how much they’ve improved this offseason. That’s after entering the offseason as one of the most stable franchises.

In the last 11 years, Tom Brady has started six Super Bowls and Peyton Manning two. Taking them out of the equation, the other 14 primary QBs for Super Bowl teams averaged 4.6 years of experience in the league. Six of them had played fewer than four years, seven of them had played more, and Patrick Mahomes made it last year in Year 4. Mayfield is in a normal quarterback Super Bowl window.

According to consensus futures odds from ActionNetwork.com, the Browns are 22-1 to win the Super Bowl, and I personally would put something down on that if you can spare it. That makes the Browns ninth in Super Bowl odds and fifth among AFC teams behind Kansas City (5-1), Buffalo (12-1), Baltimore (14-1) and Indianapolis (20-1.) And if you’re actually betting on the current version of new Colts QB Carson Wentz to win a Super Bowl in Indy, I’d like to show you a garbage disposal where you can grind up your money.

For two offseasons I’ve encouraged Browns fans to let go and enjoy the possibilities. The 6-10 record in 2019 proved me wrong, and the 11-5 record in 2020 proved me right. But this is different. Record predictions don’t matter. This is a playoff team, and the talk, at the very least, is how to get to the AFC Championship Game.

Ken Carman adopted the slogan on his morning radio show with Anthony Lima on 92.3 The Fan after hearing it from, and then meeting, Butts, Kapcar, Manzeo and their group at a farewell party several years ago for one of their show producers. That was as the 1-15 season of 2016 was unfolding as a precursor to the 0-16 misery of 2017.

“There were people who took it seriously,” Carman said. “I would get nasty emails and tweets like, ‘This is because you idiots yelled, Super Bowl, Super Browns. You guys are idiots.’”

Carman would remind angry listeners that it was just a fun bit. But it remains true that the four words, two of which are the same word, can mean different things to different fans.

“What a roller coaster it’s been when you think about it over the last four years,” Carman said, “because it’s like, ‘OK, it’s a gag,’ then it’s somewhat serious, then people took it too seriously and got mad, and then it’s like, “OK, they’re it.’ It’s something I think has always been up to the interpretation of the Browns fan hearing it.”

Maybe no longer. There’s no joke left. A chant doesn’t guarantee anything, but anyone who understands football would hear “Super Bowl, Super Browns,” and react with something like, “Well, assuming Garrett and Ward are healthy and Johnson glues the secondary together, I think Mayfield will only improve in Year 2 with Stefanski and the run game with Chubb and Hunt and that line will work, and Landry’s rock solid and Beckham’s return stretches opposing defenses and, yeah, I can see it.”

Kapcar already hears it. Carman and Lima added a “yeah,” at the end of their saying, which means the originators can now tell where other fans learned it if they hear the chant. If there’s a “yeah,” it’s a radio listener. If there’s no “yeah,” it’s someone who heard it from them.

“I see it as an anthropological trail of who it’s been through,” Kapcar said. “We get a kick out of seeing where they heard it from. We don’t have the ‘Yeah,’ but we enjoy that there is a version with it.”

Carman expects as the pandemic recedes and more fans are out and about, he’ll hear it even more, but over the years he’s already had show callers open wth a “Super Bowl” and want him and Lima to return a “Super Browns.”

Imagine now Browns fans walking into SoFi Stadium outside Los Angeles for the Super Bowl on Feb. 6, 2022, and “Super Bowl, Super Browns,” echoing through the air.

“That would be amazing,” Kapcar said. “We would just love that. The Browns are a thing. We are passionate, diehard fans, so anything that signals that the fans around us are just as passionate, it’s a community thing. It’s nice to have more and more people a part of it.”

You don’t have to wait until the Super Bowl. You can say it now, or for the NFL Draft in Cleveland in April, or on a lovely summer day, or during preseason camp, or walking toward FirstEnergy Stadium for a Browns home game. No matter where you say it now, you mean it. It’s no longer a joke. Because it realistically could come true.