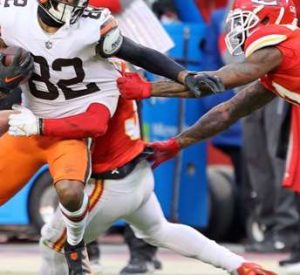 CLEVELAND, Ohio — Rashard Higgins acknowledges he turned down more money for the second straight season to ‘run it back’ with Baker Mayfield and the Browns.


He hoped to secure a multi-year deal, but signed a one-year contract with Cleveland worth $2.38 million.

“I knew where I wanted to be,” Higgins said during a Zoom interview Friday. “It was obviously a lot of teams hitting on me, and I had decisions, but why not be a Cleveland Brown? I feel like all the pieces to the puzzle are in place.”

He said more money wasn’t worth what he has here: a quarterback who love to throw him the ball, a team that made a historic run at the playoffs last season, and a fan base that loves him here.

“I was telling [Mayfield] every team that was hitting on me,” Higgins said. “I was telling him, ‘what you think about this?’ Honestly, he was telling me to weigh my options. Honestly, he wants me to be a Brown, but if I’ve got to do something on standpoint of taking care of my family, then make the best decision for me.

“Baker’s always going to be there for me. There’s no question about that. But at the end of the day, when I did weigh my options, it only made sense. So here I am. I’m a Cleveland Brown, and I’m looking to run this thing back.”

He also said he believes the Browns offered a little more guaranteed money to close the deal, which he appreciated.

As for that controversial play in the Chiefs game, he said it was a helmet-to-helmet hit and the rule should be looked at.

He said he’s betting on himself that he’ll receive a better deal next offseason when the salary cap increases in the wake of the new T.V. deals.

For now, he’s ecstatic to be back here, even though he knows there are a lot of mouths to feed on offense.

Fortunately for him, Mayfield has great chemistry with him, and can’t wait to run it back with longtime fave target.