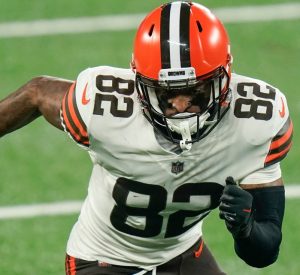 “Honestly, I knew where I wanted to be, let’s say that,” the man they call “Hollywood” told members of the media Friday. “Obviously, there were a lot of teams hitting on me and I had decisions, but why not be a Cleveland Brown?”

Higgins’ remarks were his first publicly since agreeing to re-sign with the Browns last week on a one-year, $2.38 million contract. 2021 will be the wide receiver’s sixth season with Cleveland, the only NFL franchise he’s known since being drafted in the fifth round out of Colorado State.

“The fan support for me in Cleveland is unbelievable,” he said. “To say Cleveland is not the best fan base in America, I do not know if there is a better fan base. Weighing my decision, did the fans have an impact on it? I can say yeah.”

.@CALLME_WOOD knew where he wanted to be, and that made re-signing with us a ‘no-brainer’

Higgins’ tenure with the Browns has been up and down, to say the least. He emerged as a reliable target in 2017 and ’18 after originally being cut from the roster, only to somehow fall out of favor with then-head coach Freddie Kitchens and catch just four passes in 2019. Following Kitchens’ firing and a midseason injury to Odell Beckham Jr., the 26-year-old once again became a key component of the offense, tallying a career-high 599 yards and four touchdowns to help Cleveland finish 11-5 and make the playoffs for the first time in 18 years.

“Honestly, I feel like we have what it takes with everyone being back on the team,” Higgins said, noting that only a few minor contributors to last year’s bunch are no longer around. “Andrew Berry did a hell of a job doing what he had to do to put us in position to succeed. We believe in this staff, we believe in each other and we have what it takes. Why not run it back and do what we did but even better this year?”

RELATED: John Johnson III calls signing with Browns the ‘opportunity of a lifetime’

Sadly, the season did not have a storybook ending from either a team or individual standpoint, as the Browns lost to the defending Super Bowl champion Kansas City Chiefs in the AFC divisional round. Higgins played a fateful role in the defeat when his goal-line fumble gave KC the ball at its own 20, although the hit that caused the turnover likely should’ve resulted in a penalty against safety Daniel Sorensen.

“It was just football,” Higgins said of the moment. “Looking back at it, it was a helmet-to-helmet hit. Not too much we can say about it. It is football at the end of the day. Move on.”

The NFL’s salary cap declined this offseason due to financial losses caused by the COVID-19 pandemic, and while it is expected to eventually keep increasing thanks to the league’s massive new television contracts, the current situation drove down expected dollar amounts for some players. Though Higgins fell into that category, he did imply he could’ve gotten more money to play elsewhere, but chose to stay instead.

“Obviously, a goal for me is to get paid, and that is the reason that we do play the game is because we love it, we want to get paid and take care of our family,” he said. “If I have to do what I did to do it even better, why not bet on myself again? I am willing to bet on myself every time if I have to.”

At the end of the day, Higgins called returning to Cleveland “the best situation,” both on the field and off it. He’s confident the team will be a force to be reckoned with come fall.

“I have my quarterback, I have everything in line like I want it to be and I am just glad to be a Cleveland Brown,” he said.