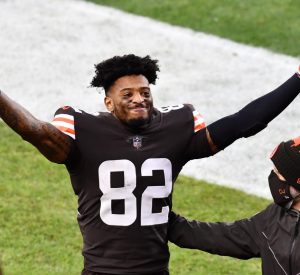 Browns wide receiver Rashard Higgins kept that status despite having strong offers elsewhere to leave Cleveland. The veteran said on Friday he chose to take less money to stick with the Browns instead of jumping for the bigger check.

In his Zoom session, Higgins offered a philosophical reason for his decision.

“It’s just like going to another team, how does that really benefit me?” Higgins stated. “Obviously, for the money, you can say that, but the cap is down. To go somewhere for another million or another two million, then you start over with a whole other quarterback and then you start over with a whole new playbook. It’s just like ‘what in another team would you be looking for?’”

Higgins returned as an unrestricted free agent, signing a one-year, $2.38 million contract with the Browns. It includes a signing bonus that Higgins acknowledged might have come as a sweetener from the Browns.

“I believe they gave me a little bit more in signing bonus so that was sweet,” Higgins said. But he made it clear he wanted to stay in Cleveland.

“I definitely had other offers on the table, but this was one that was a no-brainer,’’ he said.

He knows that another strong season playing with Baker Mayfield and the Browns offense can get him paid next offseason, when the salary cap is expected to significantly raise back up.

“Obviously, a goal for me is to get paid, and that’s the reason that we do play the game is because we love it, we want to get paid and take care of our family,’’ a relaxed Higgins said. “If I have to do what I did to do it even better, why not bet on myself again? I’m willing to bet on myself every time if I have to. The cap is going up next year, better TV, more market. It will be way better next year so we will see around this time next year where we stand.”

Higgins caught 37 passes for 599 yards and four touchdowns in 13 games in 2020, including six starts.

Browns attracting free agents looking to win, not cash in