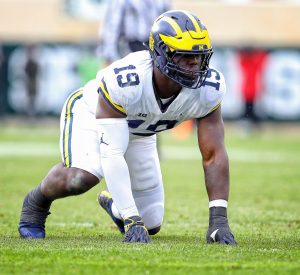 One of the names to know as a potential first-round pick for the Cleveland Browns, Michigan defensive end Kwity Paye, confirmed at his pro day on Friday that he’s already met with the team. And Paye’s performance at the Wolverines workout was a nice way to sell himself to his potential employer.

In his Zoom session with reporters, Paye said he liked watching the Browns and Myles Garrett. He sees Garrett as a model for how to play as a bigger defensive end. Paye checked in at 6-2 and 261 pounds.

“I’ve spoken with the Browns,” Paye said. “I would watch Myles Garrett because we’re kind of similar in build. When I would look at NFL D-ends or edge guys, they’re usually 250, 240 (pounds). They’re not like very heavy guys, and I weigh 270. So Myles Garrett [is a bigger end], and I kind of want to see how he uses his speed. He’s very athletic as well. He’s a freak, so being able to watch him and seeing how he uses his weight to use leverage O-tackles and certain moves that he uses carrying that weight kind of helps me.”

Paye ran the 40-yard dash at 4.54 seconds, a freakishly fast time for someone who weighs over 260 pounds. He also posted 36 bench press reps. He didn’t do the 3-cone at the pro day but he’s got that covered, too:

Per PFF, Paye had the highest pass rush win rate of any player in the Big Ten in 2020 at just over 25 percent, too.