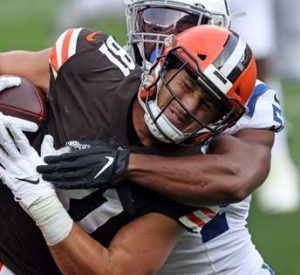 CLEVELAND, Ohio – I talked to some of my NFL sources about what the Browns and General Manager Andrew Berry did in free agency to retool the defense. Here’s what I’m hearing:

When free agency opened, many in the media and the fan base assumed the top priority was adding a defensive end to play opposite Myles Garrett. That narrative grew louder when T.J. Watt hit free agency early and the Browns were one of the teams bidding on him.

But the preferred move was actually adding speed in the secondary, especially in terms of finding a big time safety. It had to be a younger guy coming off a rookie contract, a player in his middle 20s who already was established but still peaking in terms of production.

Or as one source said, “There’s a difference between being aggressive and stupid in free agency. The Browns have been aggressive the last two years, but stayed away from stupid.”

A year ago, the Browns threw big money at right tackle Jack Conklin and tight end Austin Hooper. Both fit the profile of ascending players coming off rookie contracts in their middle 20s.

This year, they planned only one major free agent investment – a safety.

The Browns targeted the Rams’ free agents because they knew Los Angeles had major salary cap problems. Talented players were going to hit the market from the NFL’s top-ranked defense.

Berry called it being “opportunistic buyers” in his press release. Notice the Browns didn’t sign just one former Rams defensive back, they added two.

As Berry said in his press release, a player such as safety John Johnson III “doesn’t usually make it to the free agent market.” Johnson signed a 3-year, $33.7 million deal ($24 million guaranteed).

Just as the front office added players a year ago to fit the head coach Kevin Stefanski’s offense, this time they wanted players who’d work well in the safety-heavy system of defensive coordinator Joe Woods. He prefers safeties over linebackers. Berry believes the modern, pass-heavy NFL is faster and quicker than ever.

Like Mitchell, Hill is best covering slot receivers. But the Browns believe Hill can do a solid job if he has to cover wideouts.

WHAT ABOUT THE AFC NORTH?

You can say, “The Browns play in the AFC North. You need good linebackers in this division, where teams love to run the ball.”

Guess what team led the NFL in passes attempted in 2021? Pittsburgh. The Bengals ranked 14th out of 32 teams. The Ravens were 32nd, the Browns 28th.

But the Bengals are expected to the throw the ball more in 2021, assuming QB Joe Burrow bounces back from his ACL surgery. Baltimore runs a strange spread offense with QB Lamar Jackson, requiring speed to try and control him.

The Browns are counting on their safeties to play a major role. They are hoping 2020 second-round pick Grant Delpit recovers from his season-ending Achilles surgery. They like Ronnie Harrison Jr., but he missed five games due to various injuries last season.

Don’t be surprised if the Browns add a safety in the draft.

The Browns did sign a linebacker: Anthony Walker from the Colts. He is much like former Brown B.J. Goodson, only better. Goodson was considered a good leader, the Colts says Walker is a great leader. He is a strong tackler, much like Goodson.

“Walker is one of the fastest linebackers in the league,” said Berry. “His range and tenacity fits well with how we view the modern linebacker.”

Surprising fact: One of my NFL sources told me “linebackers are like running backs on offense. They have the shortest average career of any position on defense.” The reason is just as running backs take the biggest hits, it often is the linebackers delivering those blows. The body is punished, skills diminish quickly.

As the NFL writes off linebackers, their price drops. Walker signed a 1-year, $3.5 million deal. The team also re-signed linebacker Malcolm Smith ($1.2 million, $500,000 guaranteed), who is solid in pass coverage.

WHAT ABOUT J.J. WATT AND JADEVEON CLOWNEY?

The Browns looked at both veteran defensive ends. I heard they offered Watt a contract in the $8 million range that could go much higher with incentives. Watt signed a 2-year, $31 million deal with Arizona.

The Browns recently hosted Clowney. He could end up receiving an offer much like the one Watt received. The 28-year-old Clowney didn’t have a sack in eight games for Tennessee last season. He was rated good against the run, but required knee surgery.

I’m not big fan of Clowney. But the Browns could look at him as a one-year venture, much like Berry did last season when he reworked Olivier Vernon’s contract to $11 million from $15.5 million.

Vernon had only 3.5 sacks with the Browns in 2019. But in 2020, that rose to nine. He had some excellent games, especially in the second half of the season. Then Vernon blew out his Achilles in the final regular season game. That injury probably ended his career with the Browns and it’s a long road for a comeback in 2021.

WHAT ABOUT DEFENSIVE ENDS?

The Browns believe they are adding a 25-year-old defensive end at the right point in his career. Takk McKinley had 13 sacks in his first two pro seasons (2017-18). After that, he had injuries and wasn’t productive.

His $4.2 million ($3.4 million guaranteed) contract is a classic Browns exploratory contract. One year, relatively modest for a player who was a former first-round pick. I called it “exploratory,” but it’s a “let’s go this direction” move. If that decision doesn’t work out, it’s easy to change course.

Berry said: “McKinley’s skillset marries really nicely with what we look for out of our defensive ends in this system. … He has speed, power and quickness … an edge player with a very high motor.”

I expect the Browns to keep shopping for a defensive end.

Berry and Woods love veteran defensive tackle Malik Jackson, who signed one-year, $3.75 million deal. Berry became an admirer of the 31-year-old Jackson in 2019 while the Philadelphia assistant GM. Woods was a defensive backs coach in Denver when Jackson played there.

The Browns view him as a tackle who can put pressure on opposing QBs. But he also can play what Berry called “The Big End,” as he wants versatility on the line.

Defensive end Larry Ogunjobi has left for Cincinnati. The Browns view Andrew Billings (returning after opting out of 2020 for COVID concerns) and Jackson as a combined upgrade.

What happened with the Cavs & Andre Drummond?

Talking to myself about Jake Bauers, Bobby Bradley & The Tribe

Is Bradley Zimmer the best option in center field?

Rashard Higgins comes back and I’m happy about that!

New Browns face masks for sale: Here’s where you can buy Cleveland Browns-themed face coverings for coronavirus protection for adults and youth, including a single mask ($14.99) and a 3-pack ($24.99). All NFL proceeds donated to CDC Foundation.