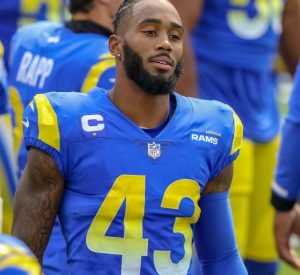 Cleveland’s first pickup of free agency was its most important one.

On the first day of the legal tampering period, the Browns agreed to terms with Johnson on a three-year deal worth $33.75 million, including $24 million guaranteed.

While a hefty price, it’s one well worth it for arguably the top safety on the free-agent market, which solidifies the biggest hole Cleveland had coming into the offseason.

Safety was a problem spot for the Browns all last year, as defensive coordinator Joe Woods cycled through a host of players after losing second-round pick Grant Delpit to a season-ending Achilles injury in training camp. Cleveland is hopeful that Delpit will make a full recovery in time for next training camp, and the Browns unearthed another reliable starter mid-year in Ronnie Harrison, who arrived before the season in a trade from Jacksonville.

Johnson, however, gives the Browns a surefire difference-maker, who should eliminate the Cleveland defense’s own Achilles’ heel from last season.

Browns fans would remember Johnson from the 2019 season when Cleveland faced the Rams on Sunday Night Football in Week 3. The Browns faced fourth-and-goal from the 4-yard line, trailing 20-13 in the waning seconds. Johnson, however, snuffed out the play and intercepted Baker Mayfield’s pass to seal the win.

Throughout 48 starts over four seasons with the Rams, Johnson consistently brought those same instincts. And he’s a perfect scheme match for Woods, who ideally would like to employ interchangeable safeties all over field in zone schemes to confuse opposing quarterbacks. While turning heads in training camp before the injury, Delpit showed signs of developing into that versatile safety. After winning a starting job in Week 5, Harrison demonstrated he could be one, as well.

In Johnson, the Browns most definitely have added another.

“It’s a young, vibrant group, guys who can play, guys who can run, great athletes and versatile guys,” Johnson said of his new safety group. “We’re all similar body types and similar skill sets. Hopefully we can all be on the field at the same time, giving quarterbacks headaches, just moving all around and doing different things from a disguise standpoint.”

The intangibles Johnson will bring could prove just as valuable. He was a renowned leader for the Rams, and called the plays for the defense from the field. On top of bolstering the talent in only one year as general manager, Andrew Berry has elevated the character of the locker room.

Johnson is just another example.

“I just want to come in and be a leader and just give (my team) tips that I have learned over my career and things that I saw even last year that got us to such a great defense, a top-ranked defense,” Johnson said, of the Rams’ stout unit. “I just want to be a guy that people can just feel my vibe and it will rub off on people.”

Walker appears to the same type of leader, at least according to his former Colts teammates, including All-Pro linebacker Darius Leonard.

Walker, a starter the last three years for Indy, delivered more than 90 tackles in each of those seasons. He’ll take over the B.J. Goodson role as a three-down, run-stuffing linebacker.

The Browns know what they’re getting in both Walker and Johnson. But the wild card of Cleveland’s free-agency class figures to be McKinley, who, like Myles Garrett, was a first-round selection from the 2017 class.

McKinley is coming off a lost 2020 season. After being sidelined by a groin injury, he feuded with the Atlanta Falcons for not trading him, including, he said, to the Browns, before eventually later being waived. McKinley then failed physicals with the Bengals and 49ers before eventually landing in Las Vegas, where he never played a down.

McKinley, however, has immense upside, which is why Cleveland still took a flyer on him with a one-year deal worth $4 million. The Browns also view his skill-set as a perfect complement opposite Garrett along the Cleveland defensive line. Garrett’s speed off the edge often forces opposing quarterbacks to step up. Now from the other side, McKinley has the power to collapse the pocket, preventing mobile quarterbacks from escaping the pressure.

With Hill sliding in the nickel role as a better-tackling, quicker version of Kevin Johnson at nickel, and Jackson giving Cleveland another proven option up front, Berry already has addressed the concerns on his defense while, as he set out to do, upgrading every level of it.