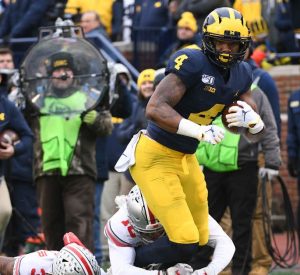 The Cleveland Browns wide receiver room was underwhelming in 2020 for whatever the reason may be. No one in the room was particularly great, Odell Beckham Jr. went down with injury and Rashard Higgins stepped up – something was missing.

Cleveland could use a deep threat on the field and it’s no secret. A playmaker downfield will open up the offense, allow the tight ends and even Jarvis Landry to work better underneath. As a rookie Donovan Peoples-Jones showed some big play ability, Browns could still use a burner or downfield possession guy to improve the team.

Luckily for the Browns, the draft is next month and it will give the opportunity to get that player, in which they should go ahead and do.

Moore doesn’t give very good size, but players have shown you don’t need size to win in the NFL. If you have speed, footwork and can change direction – you’re going to get open in the National Football League. It was noted that Moore ran a 4.32 40-yard dash, which could be true with the blazing speed he has shown.

Moore would work effectively in the slot position. A vertical threat from the slot is dangerous depending on the matchup he draws. Putting a linebacker on him isn’t going to work and with his footwork Moore is crafty enough to get open underneath.

The production is there with the Ole Miss receiver. In just eight games as a junior he went for nearly 1,200 yards and eight touchdowns. It isn’t quite clear where Moore could go in the draft. If he’s there in round two it is a no-brainer pick. There are concerns with his ability to break tackles and gain extra yards, but he doesn’t need to be that kind of guy. Moore can get away with just his speed.

If production is your thing then Wallace is absolutely your guy. Nearly 3,500 yards as a Cowboy, Wallace was a super effective college player. At 5-foot-11 he is a little bigger than Moore and can win jump ball battles.

Playing in the Big 12 as a wideout is a concern in itself, but Wallace showed enough and brings the traits needed to win in the NFL. Wallace has a torn ACL on his record that brings a little concern.

I like the ability of Wallace grooming into a guy that can do a lot of things for a team. His route tree isn’t great, but could be. On tape he shows nice burst in his cuts and has good hands that make tough catches. Getting stronger would be big for the upward trend for him as a player. Wallace isn’t a burner, instead brings everything else needed that helps him work as a vertical threat.

A mid-round pick could potentially get Wallace. Coming in for Cleveland he wouldn’t have to be relied on, he could work in as the fourth option or so. In a perfect world taking a bigger role in his second NFL season.

Another Michigan wide receiver that didn’t have a great college career, but should be a better pro. The Browns have one of those on the roster in Donovan Peoples-Jones and he was a late round steal. Bad quarterback play and coaching combine to really damper some offensive prospects that come from Ann Arbor.

Collins is physically ready for the NFL. He is 6-foot-4 and strong enough to win battles for possession. Collins opted out of the 2020 season, instead spent that time getting ready for the next level. The Michigan product is a deep threat with nice burst that brings some straight line speed as well. For his size, Collins moves decently well in routes that call for quick cuts.

Playing on the outside is suitable for Collins, but he can be a matchup difficulty in the slot as well. Like Peoples-Jones, Collins may need some time to acclimate to the NFL game in terms of being ready to produce on the field, physically he is there. A day two pick on a player that seems to be rising on boards is a good spot for Collins.