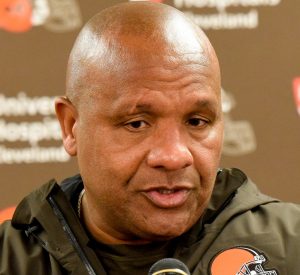 As the Cleveland Browns found themselves in the midst of what would be just the second 0-16 season in NFL history in 2017, many fans wanted to see Hue Jackson on the hot seat, if not fired.

Instead, the now-former Browns head coach claims he actually received a contract extension.

Appearing on ESPN Cleveland WKNR 850’s “The Really Big Show” on Monday morning, Jackson discussed his ill-fated two-plus year run as Cleveland’s head coach, in which he infamously amassed a 3-36-1 record. In doing so, Jackson revealed that he had received a secretive contract extension during the 2017 season, which the Browns finished with an 0-16 record.

“I got a contract extension at 1-23, midway through the season,” Jackson said, referring to his total record as Cleveland’s head coach at the time. “I wanted to go public with it, but the Browns didn’t.”

Despite the alleged extension, which was never previously made public, the 55-year-old Jackson has continued to insist that he was “lied” to by the Browns ownership and leadership team. Upon Jackson’s arrival in Cleveland ahead of the 2016 season, the Browns proceeded to tear down their roster in a rebuild that resulted in a 1-15 record in 2016 and 2017’s 0-16 campaign.

After general manager Sashi Brown was fired and replaced by John Dorsey with four games remaining in the 2017 season, Jackson remained Cleveland’s head coach entering the 2018 campaign. He was ultimately fired after a 2-5-1 start to the season, a move that Jackson said put him at the center of the blame for the team’s 3-36-1 run.

“I think I became the fall guy because that was the narrative,” Jackson said.