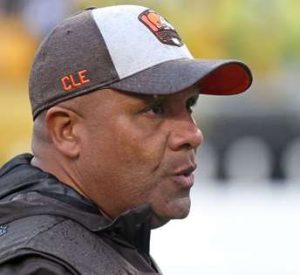 CLEVELAND, Ohio — Former Browns coach Hue Jackson said in a radio interview Monday morning that Browns owner Jimmy Haslam gave him a contract extension in the middle of the 0-16 season in 2017.


“I got a contract extension at 1-23, midway through the season,’’ Jackson told The Really Big Show on ESPN 850. “I wanted to go public with it, but the Browns didn’t.’’

Jackson is in the midst of writing a book about his two-plus seasons with the Browns, in which he went 3-36-1. He said the book will be out later this year, and he declined to reveal the title. He was fired after starting out 2-5-1 in 2018 in the midst of what he describes as a teardown of the roster that was never revealed to him beforehand.

“There’s no doubt I was lied to by ownership and leadership of the team,’’ Jackson said. “They were going to be football plus analytics, but it was football vs. analytics.’’

He added, “I think I became the fall guy because that was the narrative…the truth needs to come out…for other minority coaches. They need to know the pitfalls out there. My story has affected some of their futures.’’