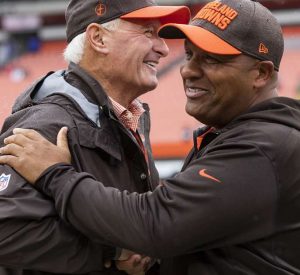 Former Cleveland Browns head coach Hue Jackson claims he was misled by ownership about the direction of the team among many incendiary points made during an interview with Cleveland’s ESPN Radio affiliate on Monday.

Jackson came out with guns blazing at several Browns-related entities, but most of them were squarely aimed at owners Jimmy and Dee Haslam.

“There’s no doubt I was lied to by ownership and leadership of the team,’’ Jackson said. “They were going to be football plus analytics, but it was football vs. analytics.’’

Jackson also revealed he received a contract extension during the middle of the winless 2017 season. He stated he earned it while his overall record was 1-23 at the time and that the Haslam’s didn’t want him to announce the deal, which would have extended him through the 2020 campaign.

Now writing a book about his experiences, Jackson believes he’s unfairly blamed for the 3-36-1 overall record during his time as head coach. He was fired midway through the 2018 season.

“I think I became the fall guy because that was the narrative,” Jackson said. “The truth needs to come out…for other minority coaches. They need to know the pitfalls out there. My story has affected some of their futures.’’

One other juicy tidbit: Jackson did admit that hiring Todd Haley as his offensive coordinator was “the biggest mistake I ever made.”

Anthony Walker: What the Browns are getting in their new LB