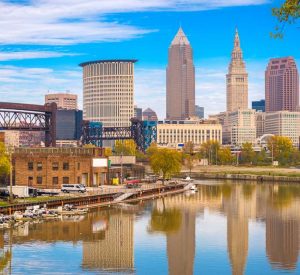 CLEVELAND, Ohio — Troy Hill didn’t grow up a Browns fan. The Browns didn’t even exist for part of the time he was growing up in Youngstown. He was a Broncos fan, which makes sense since John Elway and Co. were in the midst of winning back-to-back Super Bowls.

Hill wouldn’t mind bringing some of that winning back to his home state.

“What other place would I want to be rather than home when they go win that Super Bowl,” Hill said in a Zoom call with local media on Monday.

Hill grew up in Youngstown before moving to California at age 15. He failed his freshman year of high school and said he was on the path to dropping out before going to the West Coast changed his perspective. He credits both places with turning him into the man he is today — the Youngstown area for its toughness and California for its diversity.

Hill’s NFL career started in Ohio before winding to California, too, when the Bengals signed him as an undrafted free agent out of Oregon in 2015. The Bengals waived him and, after a brief stop in New England, he signed with the then-St. Louis Rams at the very end of the 2015 season.

The Rams moved to Los Angeles and Hill appeared in 54 games between 2016 and 2019. It was 2020 when Hill really found his niche, the one that eventually landed him in Cleveland. The Rams moved Hill to the slot and it’s where the Browns envision him in their defense.

Hill turns 30 in August, but to hear him talk about playing inside, he sounds like a young player just getting his feet wet in the league.

“I’m still learning that position, I’m still fresh at it, so I’m excited for what Year 2 has to bring for me,” he said. “Just keep going, get a little more technique in there, that’s where I was really lacking as far as my technique.”

“Troy is a versatile corner that has played inside and outside,” Browns GM Andrew Berry said in a release by the team about the team’s free agent signings last week. “He’s a smart football player who can play man coverage, zone coverage, turn the ball over and is a sound tackler. We all viewed him as a really big part of the defensive success in Los Angeles this past year, and for us, the ability to have a corner that can play at a high level on both the outside and inside gives us a lot of flexibility with who we currently have on the roster and who we may add moving forward.”

Hill is joining a familiar face in the Browns’ backfield. Safety John Johnson III signed with the Browns a few days before Hill, something Hill didn’t exactly see coming.

“I hit him and was like, ‘Where you thinking about going?’ He wasn’t giving me no disclosures,” Hill said. “So I was like, ‘Man, you’re acting like I’m the media.’ When I saw he signed with Cleveland, I was like, ‘OK, you’re going back to the home state.’”

Then Hill realized he might be joining his former Rams teammate.

“I texted (Johnson) and I’m like, ‘I think I’m about to come to Cleveland,’” Hill said. “He sent me the little emojis (telling me to come here), so it made everything easy for me.”

Now that he’s back in Ohio, Hill doesn’t just have plans to help bring a Lombardi Trophy to the state. He wants to give back to his hometown, too. Inspired by former Rams teammate Kayvon Webster, he would like to open a school in Youngstown.

“I want to open up a charter school to give back to the community as much as possible and being close to the city, that’s going to help me a lot more so I can see what’s going on,” Hill said. “I’ve been gone for 10-plus years. Now that I’m closer to the city, I feel like that’s one of the purposes that I came back home to, to bring this community back up.”

Being closer to home offers Hill an opportunity to help the community he grew up in.

It also offers him an opportunity to help a team he’s only seen lose — if he could see them at all — go someplace it’s never gone.

“They were a touchdown away from going to the AFC Championship,” he said. “I see what they’ve got.”

He said it will be like when he was a kid again, when his friends and family could come watch him play. He just needs to unite the Browns and Steelers fans he knows around rooting for his new team.

“Being able to come back home and give them an opportunity to make more games (is exciting),” he said, “even though that’s going to hurt my pockets with all the tickets.”