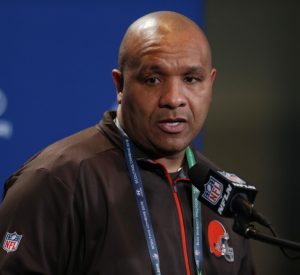 The Cleveland Browns are a few months removed from their first playoff win in a couple of decades and are on track to do even more in the near future. Somehow, former coach Hue Jackson continues to find his way into the mix with his stories from times when he was the head coach.

Jackson, who was 3-36 as the Browns head coach had a lot to say about the Browns and the organization as a whole.

“There is no doubt I was lied to by ownership and the executive team,” Jackson said on his interview with ESPN 850 radio station.

“They were going to be football plus analytics, but they intentionally made it football versus analytics.”

Fair to say that Jackson didn’t like the idea of analytics as a whole. In a fair viewpoint analytics is taking over every sport just about, rightfully so for the most part. Deep analysis have a heavy favorite of being correct if the research is right.

Jackson is going to be releasing a book at some point that will revolve around his time in Cleveland. He has pointed that out any time he’s been given a platform, looking for a boost in sales potentially.

“I want to make sure everybody knows and understands exactly what went on in Cleveland,”Jackson said. “The truth needs to come out. I’m tired of being the brunt of jokes and memes and things that people say when they don’t know.”

Jackson was not good before he came to Cleveland, the Raiders weren’t good his one season in Oakland. Dating back to when Jackson was the Browns’ head coach, he has never really been able to take accountability, instead someone else goes under the bus.

From the handling of the Deshone Kizer situation, Hue Jackson never really gave the kid a chance.

Jackson to this day wonders why Baker Mayfield isn’t very fond of him.

“To this day, I’ll never understand it. I was part of the reason he was the No. 1 pick. I didn’t spend a lot of time with Bake, we had a QB coach and coordinator.”

The Browns did indeed have assistants, but a head coach admitting he didn’t have much involvement in his quarterbacks rookie season is a tragedy in it’s own right.

Mayfield was the best quarterback on the roster, but Tyrod Taylor started for the Cleveland Browns. Jackson would have continued starting Taylor if it weren’t for the injury he suffered against the New York Jets.

Jackson handled the running back situation wrong in the same year. Carlos Hyde was the lead back for the Browns, despite Nick Chubb being the better player the moment he was drafted. Luckily, John Dorsey traded Carlos Hyde so it left Jackson no choice besides playing Chubb.

In his rookie season Chubb still had 996 yards, despite just the nine starts. Chubb showed enough in limited snaps through those first few games for the team to know he was the guy. Well, besides the head coach who still started Hyde.

Jackson says he was given a contract extension at a point in which he was 1-23 as the team’s head coach.

“I think we can all understand and think why it was not made public,” jackson said. “Because it would’ve really set the tempo for what exactly was going on there.”

It’s possible Jackson was given an extension. Perhaps the Browns thought he would be better. In the end they fired him when he was 2-5-1 in 2018. One of the better moves the team has made over the last few years.

There is no telling what Jackson is exactly trying to achieve by his stories of the times in Cleveland. Some could be true, a lot of it comes off as a person that struggles with taking responsibility. In the end the Browns are in a much better place than they were with Hue Jackson and then Freddie Kitchens. Jackson knew he was working with a team in a rebuild, a team he did no favors for with his way of coaching. Leaving Jackson in the past is the best route to go, Cleveland is into much better days and that includes finally having their head coach.