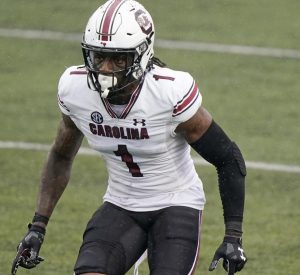 The 2021 NFL draft is going to look quite different for the Cleveland Browns than most drafts since the franchise came back in 1999.

Ironically enough, Cleveland plays host to the event in a year in which the Browns are far from the spotlight. Most years in recent memory have featured a top-10 pick or multiple first-round picks as part of a perpetual rebuilding process.

Thanks to the work of general manager Andrew Berry, head coach Kevin Stefanski and a good nucleus of young players, the Browns go into the draft as something better: boring.

The Browns are a legitimate contender looking to add a few pieces to an already-good core. They aren’t in search of a franchise savior, and with the 26th pick in Round 1, 59th pick in Round 2 and picks 90 and 92 in Round 3, they aren’t exactly loaded.

It’s a refreshing change of pace in Cleveland. Still, they will need to spend those picks wisely for the draft to continue to look like this for them. Here’s a look at a few of the needs they should be looking to address with their draft capital.

There were a lot of wins for the Browns in free agency. The additions of John Johnson III and Troy Hill revamp a secondary that was in desperate need of a remodel. They re-upped with Malcolm Smith and brought in Anthony Walker to solidify the linebacker corps.

The one area where they were surprisingly quiet was at defensive end. Finding an edge to play opposite of Myles Garrett was one of the top priorities heading into the offseason.

The addition of Takkarist McKinley is a low-risk, high-reward one-year flier. He has first-round pedigree and plenty of athleticism, but we’re still talking about a player who had 17.5 sacks in his first four seasons with the Atlanta Falcons and was put on waivers multiple times last season.

That’s not a solution, that’s a prayer. This should be as strong an indication as any that the Browns will look to address the position in the draft.

It could happen as early as the first round where Gregory Rousseau, Jaelan Phillips or Jayson Oweh could be options. But they could wait to address it slightly later where someone like Ronnie Perkins or Rashad Weaver could be available.

The Browns were 24th in pressure percentage last season, according to Pro Football Reference. With a dominant force like Garrett on one side, that shouldn’t be the case.

Denzel Ward needs a contract extension in the near future, and Troy Hill is set to man the slot for at least the next few years. However, the Browns don’t have a great answer to start opposite Ward at this point.

Greedy Williams is the most obvious candidate, but he missed all of 2020 with a nerve issue in his shoulder. In two years, he has played just 12 games and didn’t flash enough in those games that he should be the no-questions-asked starter in 2021.

The club said goodbye to Terrance Mitchell in free agency further compounding the lack of talent in the secondary.

The Browns should be looking to lock up another young option who can compete with Williams as the starter. In today’s NFL, it’s hard to have too many defensive backs.

A corner with size and physicality to complement the smaller Ward would be ideal. Ifeatu Melifonwu would be a strong option in the second round if the Browns pass on someone like Jaycee Horn in the first. Either way, the Browns need to come away with a potential starter at corner.

The Browns have few needs on offense, and this is not one for the first or second round, but there has to be a plan for the future of the wide receiver room.

For now, it appears the team is comfortable shelling out big money for Odell Beckham Jr. and Jarvis Landry. The pairing will cost the team roughly $30.6 million next season. They are scheduled to carry the two biggest cap hits on the team next season.

Beckham’s contract runs through the 2023 season but isn’t guaranteed after this season. Landry’s deal runs through 2022 and is largely non-guaranteed at this point. Keeping both around at their current numbers once Baker Mayfield is signed to an extension is going to be tricky.

Instead, the Browns should be utilizing this draft to find a player they can develop to replace one of those two receivers for 2022 and beyond. Taking a swing on that player now will keep them from depending on a rookie as Mayfield hits his prime.

There are, of course, first-round options, but that would be ignoring a defense that needs more help. Instead, the Browns should be focused on finding playmakers a little later in the draft.

Dyami Brown of North Carolina and Amon-Ra St. Brown of USC are the kind of receivers who would bring some big-play ability to the Browns offense and could still be available when they are on the clock at No. 90 and 92.