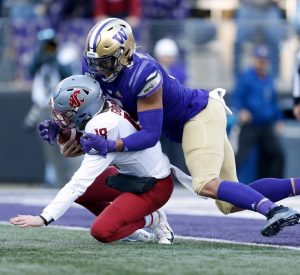 With the 2021 NFL Draft approaching, the Cleveland Browns will have their own tastes and board based on what they are trying to do in every phase of the game. Based on what is known about what they want to do, some prospects stand out as fits including Joe Tryon, edge rusher from the University of Washington.

Tryon has a well rounded athletic profile and he will be 22 when he’s selected in the 2021 NFL Draft. His explosion and speed are both good. His hips are great. His ankles did not test well as would be expected given what he does on the field, but it’s not a problem; just unexpected.

Tryon’s production is great when it comes to making plays behind the line of scrimmage, but his lack of tackles is indicative of the film. He absolutely looks the part of a multifaceted pass rusher that can play the run and impact the passing game, both in terms of his size and overall length as well as how quickly he can come off the ball.

However, he gets stuck on too many blocks without a plan B. This occurs both in the run and the passing game, where he will be shut down and unable to further pursue plays, stood up entirely.

Washington’s defensive scheme often employed Tryon as a wide-9 tech that could get a running start up the field and change direction from the lower half, swatting the opponents hands out of the way. When opponents are able to get out to block him, he is too often erased entirely.

His hands just haven’t been great in terms of being able to prevent from being engaged in blocks or get out of them. It just seems to be a lack of trust and technique at this point, so there is hope.

At times, he will be lined up inside a basically a 4-tech defensive end and can show some real pop in his hands, which portends for good things in the NFL. This is also where he does his best run defensive work. Able to deliver a good punch to knock the opponent back and get into the backfield. But in these situations, he’s not really trying to beat a block but win the position.

That’s the potential issue with Tryon not playing this past season. One would assume he worked on getting better with his hands and defeating blocks as well as developing a counter move, but there’s no game tape to watch. Based on the 2019 film, Tryon is a nice player with potential, but he’s not a finished product and he display what could be a fatal flaw.

Nevertheless, with the right coaching and if he’s willing to put in the work, Tryon could be a nice player that could develop into a full time defensive end. Early production might need to be schemed until he can improve at defeating blocks.

The game against Oregon and Penei Sewell in particular highlights the difference between where Sewell is as a player and where Tryon still has to go. He feasted on poorer competition but still has room to grow.

Where the Browns Might Select Him: Tryon could go as early as round two, but should probably be selected in the top 75. Maybe the Browns feel compelled to take him at 59th pick, but they have a pair of picks in the third round and could move up if they want.