Home » Cleveland Browns » ‘I love the organization’, has met with team 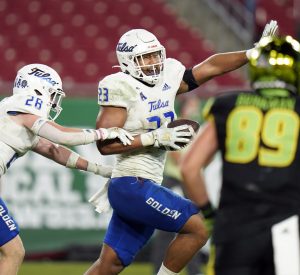 Tulsa linebacker Zaven Collins is the current leader in the clubhouse for the most mock draft projections as the No. 26 overall pick to the Cleveland Browns. The versatile defender let it be known in his pro day press conference Zoom that he’s interested in making those projections a reality.

Collins acknowledged he’s met with the Browns more than once and really likes what he’s seen from afar.

“I love the organization. I love the program. I love all the coaches there,” Collins said.

“I have no choice (who picks me),” Collins continued. “Wherever I’m going to go, I’m going to fit in because I know I will. I’ve done it every time in my life. I like to be around people, enjoy people, make people’s day better, and it seems like [the Browns] have that going in their program already. They’ve completely changed the culture the last couple years, and it seems like a great program.”

Collins can play both off-ball linebacker and as a stand-up pass rushing EDGE, in the vein of Olivier Vernon. His positional versatility is a selling point.

The Oklahoma native did say he’s not going to personally attend the 2021 NFL draft in Cleveland, but that doesn’t mean he won’t be visiting the city soon. Perhaps for an extended career stop…