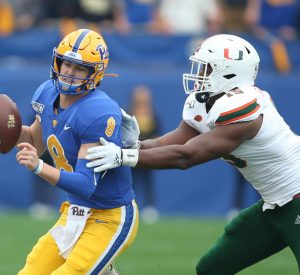 The latest two-round mock draft from ESPN draft analyst Todd McShay came out on April 1. And while the day is typically full of foolish frivolity, this projection lands substantive defensive help to the Cleveland Browns.

It’s an interesting choice for McShay to project Miami DE Gregory Rousseau to the Browns at No. 26 overall. Rousseau did not test well athletically at Miami’s recent pro day and sat out the 2020 campaign as a COVID-19 opt-out. McShay leans on his impressive tape and results with the Hurricanes in 2019,

Takkarist McKinley isn’t the Browns’ badly coveted impact pass-rusher opposite Myles Garrett — he has totaled just 4.5 sacks in 18 games over the past two years. Rousseau opted out in 2020 but posted 15.5 sacks in 2019 with the Hurricanes — second in the nation to Chase Young. He needs some polish to his game, but he has a quick first step and the versatility to kick inside at times. He fits a need and comes with good value here at No. 26.

Moving to the second round, McShay offers up speedy Georgia CB Tyson Campbell at the No. 59 pick. That’s higher than typical projections for Campbell, who tested very well but had an uneven career for the Bulldogs.

Worth noting: One pick before Campbell, McShay slots Penn State DE Jayson Oweh. He’s normally a contender for the Browns in the first round.