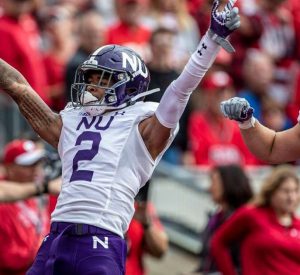 The Cleveland Browns’ offseason strategy has been rather simple under general manager Andrew Berry: fill needs in free agency so that the draft can be used to take best player available. It is not to say that the team has added a Pro Bowl-caliber player at every spot but there is an acceptable option across the board. The Browns operated under the same strategy this year adding key pieces to the defense like cornerback Troy Hill, safety John Johnson III and defensive tackle Malik Jackson.

If cornerback Greedy Williams and safety Grant Delpit return healthy, it is easy to see that the defense is in much better shape. The Browns could use some insurance at edge rusher, linebacker and cornerback but none present pressing needs that will cause the season to topple. The Browns are in a position to take the best player available once again and that led them to take key reserves like offensive guard Nick Harris, tight end Harrison Bryant and wide receiver Donovan Peoples-Jones a year ago.

Below is a seven-round mock draft specifically for the Browns:

With each passing day, the odds of Newsome being available late in the first round are slipping. Perhaps the Browns could become a soft landing spot for sliding Virginia Tech cornerback Caleb Farley, who is having another procedure on his back. Newsome would give Cleveland another high-end starter at the position but also creates depth in the event of injury. Denzel Ward and Greedy Williams have had difficulty staying healthy so the idea of having a third capable cornerback to prevent Hill moving from a more natural position is appealing.

Smith is a long edge rusher with natural pass-rush traits. Hand up — he is one of my guys in the 2021 NFL Draft class and many do not project him to go this high. Cleveland lost veteran edge rusher Olivier Vernon in free agency, which was always expected but is a step back from where it wanted to be regardless. Although the team made a run at some top free agents at the position, the money was simply not right. In the event that the Browns sign Jadeveon Clowney, it should not preclude them from taking a flyer on Smith and his immense potential.

The selection of Mills might come as a surprise and perhaps even elicits stronger emotions. However, his strengths fall in line with a player like Baker Mayfield. Mayfield is digging his heels in as the team’s long-term starter and should not be threatened by the addition of a third-round pick. At the same time, it is a cost-saving mechanism without compromising quality. Some bills are coming due for Cleveland and cap flexibility will be important. Last year’s No. 89 overall pick, Patriots tight end Devin Asiasi, received a four-year deal worth $4.58 million or an annual average of $1.145 million. The Browns could get out of Case Keenum’s deal next offseason and save $6.5 million. The Bills did the same thing this offseason.

Hufanga continues the overhaul for the secondary. He is a bigger safety that can play down in the box and sometimes play linebacker. It is a selection that would create even more versatility for defensive coordinator Joe Woods’ scheme. If Ronnie Harrison walks after the season, the defense already has its replacement on the roster.

In the introduction, the term value was used to describe Cleveland’s approach. It is difficult to project value because that is determined by how the board falls. The players the Browns draft in this projection may actually be lower rated than those they are able to add. Togiai gives the AFC North franchise another body in the middle of the defense. He is thrust into a rotation that includes Jordan Elliott, Sheldon Richardson, Andrew Billings and Jackson. Richardson and Jackson are scheduled to hit free agency after the season.

Jaimes would compete to become the swing tackle following Kendall Lamm’s departure. Griffin is another body in the secondary. In one offseason, the team would have added Johnson, Hill, Newsome, Hufanga and Griffin. Finally, two wide receivers worth a flyer. One offers speed and play-making ability after the catch whereas McMath is a chiseled athlete that is still developing his own game. It has been difficult for wide receivers not named Justin Jefferson, Ja’Marr Chase and Terrace Marshall to find repetitions in that LSU offense over the past two years.