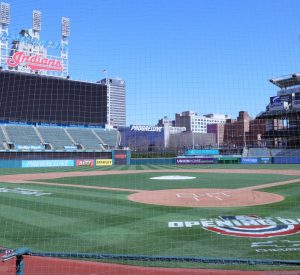 CLEVELAND, Ohio — For eight years, the Indians carried the load of winning in Cleveland.

Of course, the Cavs’ resurgence fueled by LeBron James led to four straight NBA Finals appearances and the end of the city’s championship drought, a peak unseen in Cleveland since the Browns’ dominance of the ‘40s and ’50s. In the last 55 years, the Indians and Browns have combined to play for three championships. The Cavs played for a title four straight years. That will never be underestimated.

But the Cavs fell off as quickly as they rose, the return of James an unforgettable four-year burst. The four years prior and the three years since, the Cavs have combined to win 30 percent of the games.

For consistent winning, the Indians have been the answer. Their success helped fill the gaping hole blown in Northeast Ohio’s sports landscape by the Browns’ departure. It’s time to let the Browns return the favor, and let the Indians rebuild and reset with some level of appreciation and accommodation.

If baseball season frustrates you this summer, and I think it might, it’s OK. Because football is coming. And Cleveland football is good. Sure, everybody wants all their teams to win all the time, but the real misery comes from a solid year of losing — basketball to baseball to football and back again. The teams can’t time their ebbs and flows to each other: “Hey, you making the playoffs this year? Cool, we’ll tank then.” But it’s like the Browns and Indians have done just that.

Not every Indians fan also loves the Browns and/or the Cavs, but many do, and while football lost big in 2016 and 2017, baseball and basketball lifted up Cleveland sports through 1-31. The Browns were the worst team in NFL history as they won once in two seasons, while the Indians and Cavs were peaking. In 2016, the Indians played into the 10th inning of Game 7 of the World Series, and in 2017 they posted the best record in the American League. The Cavs won their title in 2016, then followed with another Finals run in 2017.

The greats from that era are gone. James and Kyrie Irving left. So too did Francisco Lindor, Carlos Santana, Edwin Encarnacion, Michael Brantley, Corey Kluber, Carlos Carrasco, Trevor Bauer and Mike Clevinger. It’s the end of an Indians era. It’s not pleasant, but it’s sometimes how it works. Now Myles Garrett, Nick Chubb, Baker Mayfield, Denzel Ward, Jarvis Landry, Odell Beckham, Colin Sexton, Darius Garland and Jarrett Allen are ready while the Indians are likely to take a step back. It’s the Browns’ turn to win big, the Cavs’ turn to gradually transition from rebuilding to winning, and the Indians’ turn to prioritize the future over the present the way the other two teams in town recently did.

The Indians won’t call it that. They won’t admit to rebuilding, insisting that they can win during this obvious shift made clear by the January trade of Lindor and Carrasco to the New York Mets. Team president Chris Antonetti said after that deal that the Indians didn’t want to go through an extended rebuild.

The Browns didn’t articulate their plan either while they clearly were taking a step back with purpose. Maybe the Indians will surprise everyone, carried by Shane Bieber and Jose Ramirez. I think it’s acceptable, with their payroll plummeting, if this is the start of rebuild. Because that’s normal. In fact, I might advise fans to assume it’s happening even if the team won’t say it. Among the five of us at cleveland.com who predicted the Indians’ season, I was the only one who picked a losing record. I’m not exactly sure what anyone is holding on to. Because this makes sense.

And football is coming.

Since 2013, the Indians have played in five postseasons and in the other three years, they were eliminated after Game 160, Game 157 and Game 160. That means between 2013 and 2020, the Indians played 1,192 regular-season games, and just eight were meaningless. That’s eight long summers of caring about your team with a return on your investment. So while the current payroll slashing is frustrating, any fan who is immediately out on this franchise is taking for granted, I believe, eight seasons of wonderful fun.

The Indians are due for a step back, because as much as baseball is beset by payroll disparities, there is real competitive balance. Over the previous eight years, while the Dodgers were the only team to make every postseason, the Mariners and Phillies were the only teams to not make the playoffs at least once. Baseball teams take turns. One rises up as another goes down. The Indians were in the top echelon for almost a decade.

Now the Indians are young. Baseball-reference.com has stats called pitching age and batting age which devise an average for a team based on the June 30 age of their players that season, and the total innings or plate appearances of all those players. It’s a bit of a rough number, but it’s good for comparisons.

Last season, the Indians ranked 20th in baseball with a pitching age of 27.6. In 2017, they were eighth in pitching age at 28.9. This season, they’re starting this season with only one of their top eight pitchers (the starting rotation and top three bullpen arms) older than 26. They’ll be among the youngest staffs in the league.

Offensively, according to baseball-reference.com, there are 186 active players who have scored at least 200 career runs. I searched that while looking for some kind of shorthand that combined production and experience. That’s an average of six players per team. The Indians have only three players who meet that threshold — Jose Ramirez, Cesar Hernandez and Eddie Rosario.

Five other recent Indians meet it as well: Santana, Brantley, Lindor, Jason Kipnis and Yan Gomes. I’m not here to long for the return of Kipnis. But there isn’t a lot of experience is this lineup. Yet the Indians aren’t exactly turning the lineup over only to their top prospects. Bobby Bradley, Nolan Jones and Daniel Johnson aren’t on the roster. Maybe they will be soon.

If that happens, why should you feel all right about the Indians going young? Because it worked for the Browns and might work for the Cavs as they build towards something. The Browns are a playoff team and the Cavs, if they add one more scorer in this draft, could be ready for a playoff jump next season. Cleveland sports are going to be relevant, even if the Indians aren’t for a few years. It won’t be like 2003, which made for a full 12 months of Cleveland sports misery.

The Cavs, led by Ricky Davis, finished off a 17-65 season in April, 16 days after the Indians started.

The Indians, led by Jody Gerut, finished off a 68-94 season in September, 21 days after the Browns started.

The Browns, led by William Green, finished off a 5-11 season three days before the year ended.

That was 12 straight months of irrelevance, one losing season on top of the other. But in June, James had arrived as the first pick in the NBA Draft, a shot of hope into a forlorn landscape. Since then, the only years where all three teams finished with a losing record were 2004, 2011 and 2012. You can see that at the start of this graph of overall winning percentage, which begins in 2011. The Browns (orange line) stayed awful, but the Indians (blue line) and Cavs (wine line) became interesting and competitive championship contenders.

If the Indians fall now, the other teams will be there to catch them. Some Cleveland team will win in 2021. For the first time in a long time, it just may not be the baseball team.

The Talkin’ Tribe Opening Day event will take place virtually on April 5 from noon – 1:30 p.m. — featuring Indians sports writers and columnists from cleveland.com and The Plain Dealer. Tickets can be reserved here. Plus, join our VIP experience and get the opportunity to mingle with former Cleveland Indians players and more. There are only 150 tickets available for this exclusive experience and tickets can only be won through our sweepstakes.

New Indians face masks for sale: Here’s where you can buy Cleveland Indians-themed face coverings for coronavirus protection, including a single mask ($14.99) and a 3-pack ($24.99). All MLB proceeds donated to charity.

All quiet on the offensive front as Indians lose to Tigers again, 5-2

Logan Allen gets home-opener start and 3 other things

How does Amed Rosario fit on the roster? Hey, Hoynsie

The Lindor contract and the game within the game: Pluto

Could 2021 bullpen be one of the best in baseball?

Indians roster: Who stays and who goes by season’s end? Podcast