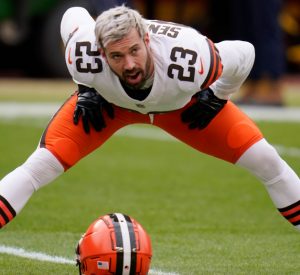 When talking with new Cleveland Browns cornerback Troy Hill I brought up the topic of what jersey number he preferred to wear as a Brown. I prefaced the question with his history of having to sell his number to other players twice during his career. While with the Rams, Hill sold his number to Eric Weddle and then again to Jalen Ramsey when he joined the team.

Hill stated he like the No. 23 because he remembers watching Joe Haden wear 23 with the Browns when he was a kid. He went on to say “we are still in the works right now, I guess they are trying to figure out what they are gonna do with…Sendejo.”

Safety Andrew Sendejo wore the 23 jersey in 2020, but he is a free agent and seemed unlikely to return to the Browns in 2021. They could bring Sendejo back to fill the depth role he was originally brought on to play last year when was forced into action due to Grant Delpit’s preseason injury, resulting in a less-than-ideal 999 snaps played by the veteran.

The Browns successfully bolstered the safety position with Hill’s Rams teammate John Johnson III in free agency and it appeared that any further depth wouldn’t include Sendejo. It was surprising to hear that he was still potentially in the Browns plans moving forward.