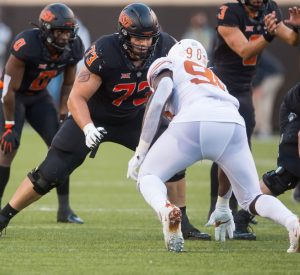 The draft process is focused on finding players that a team wants and the Cleveland Browns are going to hopefully get another productive crop at the end of April. Whether it’s watching college football or just doing research for the NFL Draft, there are prospects that stand out as players teams don’t want to see twice per year in their division.

A couple of these players stand out as great options for the Browns, so it’s natural to hope they don’t end up on the rivals within the division. Two players stand out in that respect while two others are in areas the Browns don’t have needs, but would likely make a significant difference for the fortunes of their respective teams.

Unless the Atlanta Falcons take a quarterback to build for the future with the fourth pick in the draft, the most reasonable choice they can make is selecting Kyle Pitts, the tight end from Florida.

Pitts is the only option that would make sense for the Bengals to take over Sewell. Ja’Marr Chase is a tremendous prospect, but only Pitts truly transforms that offense in a way that can overlook Sewell.

Sewell is 6’4 3/4″ 331 pounds and his explosion is ridiculous. Running a 5.09 40 yard dash and broad jumping 109 inches is ridiculous. It takes an unbelievable amount of power to move that much weight that far and that fast.

His tape is unbelievable too. Sewell simply doesn’t lose. He’s agile enough to cover ground and powerful enough not to give it up.

On top of everything else, he’s 20 years old. This is a Myles Garrett type prospect for the offensive line. People can quibble with his arm length and nitpick any number of things about lunging and whatever else. He’s 20 years old. Coach him. Garrett and T.J. Watt will be playing the Bengals twice per year for perhaps the next decade.

Sewell can step in and play left tackle right now and they can either move Jonah Williams to right tackle or left guard. They signed Riley Reiff in the offseason, which is a great move for them as he can play both right tackle and guard.

Would a player like Chase scare the Browns? Sure. He’s a terrific prospect, but so long as they can put pressure on Burrow, they will win. The worst thing in the world for the Bengals to do would be to ensure Burrow has time to operate and pick apart defenses. There are great receivers every year, available in every round. Maybe none of them will be Chase, but they will not find a kid like Sewell again.

The Bengals and notably Zac Taylor could not have mishandled Burrow’s rookie season worse and it resulted in a catastrophic injury. This is their chance to make up for that egregious error.

The Steelers need to embrace the fact they are going to stink and make a meaningful effort to look toward the future. It’s incredibly unlikely they are going to find a way to bring back left tackle Alejandro Villanueva at left tackle and they may get the opportunity to replace him with rookie Teven Jenkins.

Jenkins turned 23 in March, which makes him two and a half years older than Sewell and only helps to illustrate how much of a no-brainer that pick should be for the Bengals.

Jenkins is a remorseless, glass eating, road grader of a tackle who thrives on the suffering of his opponents. Watch him in a game like Texas where he’s going against Joseph Ossai (an edge rusher I really like) and there are times when he’s sending him flying like a tumble weed or chucking him down the field and he doesn’t stop.

Jenkins has the size the Steelers seem to like at tackle at 6’5 1/8″ 317 pounds, especially when they just signed the 6’5″ 326 Rashaad Coward, who may well be the starter at right tackle.

The Steelers would get younger and stronger up front, which is desperately what they need especially if they are going to try to reclaim the ground game in addition to protecting their sea cow quarterback, Ben Roethlisberger.

Trevon Moehrig is arguably the top safety in the class and the Ravens getting him would be no picnic either, but Jevon Holland, the second duck on this list is the scarier proposition in Baltimore.

Everything the Ravens do under Wink Martindale is predicated on their secondary. They have made significant investments on the back end and it allows them to blitz relentlessly while avoiding getting gutted on the back end.

In the 47-42 loss the Browns suffered to the Ravens, their receivers struggled to create separation. It wasn’t until they started isolating Kareem Hunt that they were able to find seams in the defense to exploit.

Holland is a safety with corner instincts and athleticism. So not only does he come equipped with the athleticism to cover at safety, he’s a ballhawk. When the team released Earl Thomas, they lost that play maker at safety and Holland would restore that ability.

Holland plays the ball extremely well while in the air and he’s not afraid to undercut routes when he sees opportunities. Maybe it results in some big plays, but if they are able to generate pressure with the blitz, the quarterback may make mistakes where he takes full advantage to create turnovers. He can play both free safety but can operate from the slot, so they get some added versatility.

Unless it’s because they pick him, the Browns do not want to see Ossai in the division, regardless of which team would select him. He seems ideal for what the Steelers and Ravens want to do defensively, but he could thrive with the Bengals as well.

A tremendous athlete who produced at a high level in spite of being raw as an edge rusher, Ossai may not be the athlete that Jayson Oweh is, but he’s been the better football player.

So much of it comes from the fact Ossai’s engine never stops. He just never appears to get tired and plays with relentless effort. Opponents get exhausted just dealing with him and he will make a few players on that fact alone.

Still, between his speed and what he’s shown in terms of trying to improve his ability to defeat blocks, he may not be a finished product, but the finished version of him may be truly terrifying. Likely best suited as a second pass rusher and depth initially, he’s a spark plug that opponents hate playing against, because he never lets them take a break.