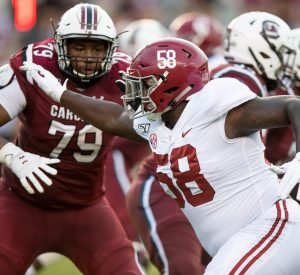 The latest 2-round mock draft from Pro Football Focus follows the prevalent philosophy of building up the defensive front for the Cleveland Browns. PFF analyst Austin Gayle offers a little twist on the choices by not tabbing a defensive end or EDGE with either choice.

Gayle, in a mock laying out what he would do and not necessarily a projection of what will happen, selects Alabama DT Christian Barmore with the No. 26 overall pick. Barmore makes sense as the top tackle in the class, and the Browns do need reinforcements along the interior line.

In the second round, Cleveland tabs Kentucky linebacker Jamin Davis. After Davis’ exceptional pro day performance, it seems unlikely he would fall to No. 59 overall, but it’s a smart pick to help spike up the athleticism and versatility of the LB corps.