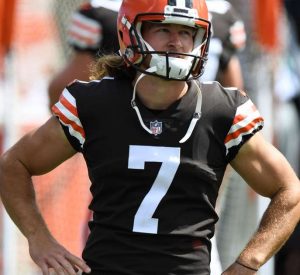 Free agency has changed the dynamics for several NFL teams. Keeping track of all the additions and subtractions to rosters around the league and how they impact the power structure can be tough. Nate Davis of USA TODAY tried to sort out the balance in his latest NFL power poll, updated after the first couple of weeks of free agency.

© AP
Special teams coordinator Mike Priefer had another rough night with his units. The kickoff coverage was unacceptably weak, allowing two returns over 40 yards. The only way they avoided the return peril was when new kicker Cody Parkey unintentionally yanked a third-quarter kickoff out of bounds for a penalty. Fortunately for the Browns, they didn’t need Parkey to attempt any field goals. Punter Jamie Gillan only had one attempt, and the same was true for return specialist JoJo Natson.


The Cleveland Browns held steady at No. 7 overall. That’s where they were before adding safety John Johnson, cornerback Troy Hill, bringing back wideout Rashard Higgins and various other moves. The prominent new defensive additions weren’t quite enough to nudge the Browns above the Baltimore Ravens at No. 6.

There wasn’t much movement above the Browns. One interesting note: the Rams moved up despite losing Johnson and Hill (and others) off the defense by swapping in QB Matthew Stafford. Never forget it’s a quarterback-driven league.

What if Gonzaga’s Jalen Suggs had picked football over basketball?