Home » Cleveland Browns » Sam Darnold, whom the Browns once pondered at No. 1 in 2018, traded by Jets to Panthers 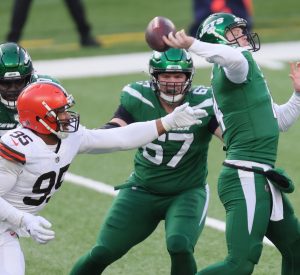 CLEVELAND, Ohio — Three years ago at this time, some Browns fans were clamoring for their team to draft Sam Darnold No. 1 in the 2018 NFL Draft.

Instead, Browns GM John Dorsey threw the NFL world a curveball and drafted Baker Mayfield instead.

Darnold went No. 3 to the Jets, and struggled in his three seasons, including the last two under head coach Adam Gase, who was fired in January after a 2-14 season and a 9-23 mark in New York. Monday he was dealt to Carolina for three draft picks: the Panthers’ 2021 sixth-round pick (226), 2022 second-round pick and 2022 fourth-round pick.

With the No. 2 pick this month, the Jets re poised to draft a quarterback. The Panthers, meanwhile, will pick up Darnold’s fifth-year club option worth just over $18 million, according to Jeremy Fowler of ESPN.

The Panthers have been looking to upgrade the position after signing Teddy Bridgewater to a three-year, $63 million deal last offseason. The Panthers had some interest in trading for Deshaun Watson, but recent sexual assault allegations thwarted those plans.

While the Jets won only two games last season, one was Darnold’s 23-16 victory over the Browns in which he completed 16 of 32 attempts for 175 yards with two TDs. It was the game in which the Browns found out the night before that their entire starting receiving corps and left tackle Jedrick Wills Jr. would have to miss the game because of coronavirus protocols.

The Browns thoroughly scouted Darnold, but Dorsey had been sold on Mayfield even before he took the Browns job in December of 2017. Former coach Hue Jackson liked Darnold, but also became enamored with Mayfield as the pre-draft process wore on.

Mayfield has gone 23-22 with 75 touchdowns and 43 interceptions. He’s earned an 89.1 rating, and led the Browns to the divisional round of the playoffs last season, where they lost 22-17 to the Chiefs.

Darnold was the second of five quarterbacks drafted in 2018′s first round: Buffalo’s Josh Allen, whom the Browns also considered, was drafted No. 7; Josh Rosen was taken No. 10 by the Cardinals, and Lamar Jackson was drafted No. 32 by the Ravens. Rosen is currently a backup in San Francisco.