Home » Cleveland Browns » When should Andrew Berry aim for a receiver? 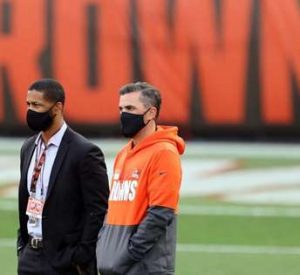 CLEVELAND, Ohio — The Browns had major defensive needs going into the offseason, and still do heading into the 2021 NFL Draft. They still need a No. 2 edge rusher, a No. 2 cornerback and a coverage linebacker.


However, they also need help at receiver, and someone who’s probably more than just a speedster.

Four receivers will be free agents after the 2021 season, including Rashard Higgins and KhaDarel Hodge. Jarvis Landry will be a year away from free agency. So there’s plenty of reason for Andrew Berry to go for a receiver in what could be as deep a receiver class as ever. But the question is when?

The first round may be a little too rich unless the Browns sign Jadeveon Clowney before the draft, which might push the need for an edge rusher down.

I take a guess at when the Browns should target my receiver in my first Browns seven-round mock draft of the 2021 cycle. I won’t make trades in this mock, so I’ll be making nine picks all the way to the bottom of the seventh round.

As of now, finding a No. 2 edge rusher opposite Myles Garrett is probably still the biggest priority. There seems now to be a cluster of about four players battling for the second spot in this class behind Michigan’s Kwity Paye.

Ojulari might have the fewest questions of the group. Miami’s Jaelan Phillips has a concussion history, Penn State’s Jayson Oweh didn’t have a sack in 2020 and Gregory Rousseau didn’t play in 2020 after an amazing season in 2019.

He may not be the prototypical fit for a 4-3. But Ojulari weighed close to 250 pounds at his pro day and could add more weight if needed. His speed and motor are things that can’t be taught. His technique can be improved on. However, considering whoever goes here won’t necessarily need to start at first, Ojulari can step in and have an impact as a situational pass rusher from Day 1.

This was a decision I wrestled with because there are some good receiver options. I like how dynamic Purdue’s Rondale Moore is with the ball in his hands and how explosive Elijah Moore of Ole Miss can be.

But Brown is the pick here because of a combination of athletic ability and production. He had 20 yards per reception in back-to-back seasons. Not only did he have that high average, but he did so on 55 catches, which is even more impressive.

Brown showed how good of a deep-ball threat he can be, which is an element that can take the Browns’ offense to a different level. While his route-running technique needs some refinement, the tools are there for him to be an impact player quickly.

Nearly a quarter of the Browns’ schedule involves them facing Chase Claypool and Tee Higgins. Their size can be a problem for Denzel Ward. So here’s a corner who’s much more physically built to handle receivers like Claypool and Higgins.

St-Juste didn’t have an interception in college but impressed in 2019 with 10 pass breakups. He’s an upside pick in this spot, and a team can certainly bank on his size combined with remarkable agility as tools to build around.

The Browns added Anthony Walker to the linebacker corps, replacing B.J. Goodson with another run stopper at the position. But they need another linebacker who can cover to go with Malcolm Smith.

So we go back to the UNC well with Surratt, a very athletic and interesting linebacker prospect. He’s still learning the position but has physical tools. A former quarterback, Surratt also possesses instincts that allowed him to have instant success at his new position.

If the postseason and, most notably, the Super Bowl, taught us anything, it’s that you can’t have too many offensive linemen. So the fourth round is a good spot to add more depth to the offensive line.

Hainsey needs to add some weight. But he moves well and has plenty of starting experience. He is more likely to be a pro guard but has potential to be a tackle in the right offense.

Much like the offensive line, investing in the interior of the defensive front is also crucial no matter the scheme. It’s not a good defensive tackle class, so this could be the right spot to add one.

Brown was a crucial part of the Aggies defense in 2020 as he helped Texas A&M chase a College Football Playoff spot. He has great explosiveness and prototypical size for the position. He doesn’t turn 21 until August, meaning he still has some room for development.

On a personal note, this is one of my absolute favorite Day 3 players in this draft. There is some Kam Chancellor in his game from his frame to how he plays from the safety spot.

Deablo plays downhill extremely well, but is good in coverage as well. He could be the type of safety who bumps down to linebacker in certain situations to create a big nickel look. He’s just such an intriguing player and has the potential to be a steal in this spot.

This late in the draft, you’re looking for one of two things: raw athletes or players who will probably be special teamers. Kaindoh, a former five-star prospect, fits in the former category.

He had a promising start to his career with seven sacks and 11 tackles for loss in his first two seasons. But he played just 10 games combined in 2019 and 2020 and had just one sack. Considering how well he tested out at his pro day, he’s worth a look this late in the draft.

Stuard fits in the second category I mentioned when talking about Kaindoh in the previous pick. He may be nothing more than a special teamer, but those players do matter as guys who fill out the end of a roster.

He is a very good downhill player and plays very physically. That could make him a good weapon on special teams. It’s not a glamorous role, but odds are you’re not getting more than that with the third-to-last pick of the draft.