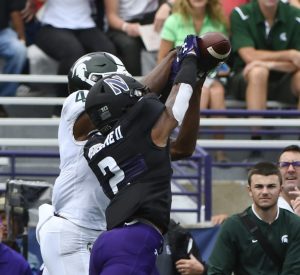 With the 2021 NFL Draft approaching, the Cleveland Browns will have their own tastes and board based on what they are trying to do in every phase of the game. Based on what is known about what they want to do, some prospects stand out as fits including Greg Newsome, a corner out of Northwestern.

Newsome has a great profile across the board with one exception. His straight line speed and explosion are elite and his hip flexibility and agility is good. His issue is his ankles and that harsh change of direction, which is something that shows up on tape.

Newsome is an excellent cover corner with experience playing both off and tight coverage. He’s operated out in both zone and man coverages as well, all of the coverages the Browns defense would seemingly want him to play. Further, the off brand of coverage he plays might be exactly what the Browns want him to play.

Able to make many plays on the ball, Newsome is a preventer rather than a player who is going to intercept passes thus far in his career. He is adept at running with receivers and finding a way to bend his body around to poke passes away from receivers, particularly from a trail position.

One area where Newsome is vulnerable is on come back style routes with an extreme change of direction. Newsome can run with just about anyone down the field, but he has difficulty being to make a transition, getting down hill to make the play. His shuttle time helps to illustrate the problem.

To Newsome’s credit, he will make the tackle and limit the damage. Unfortunately, Newsome can be pretty reckless with his body and throw himself at opponents to make tackles rather than use good technique. At times, Newsome looks under control and imposing as a tackler, but when he’s more desperate, he becomes more reckless.

He is a player who has missed time due to injuries in his collegiate career, 13 in all, which could be an issue for the Browns, who already have a pair of corners who have missed a significant amount of time to injuries.

Newsome has a big, long body but he’s not particularly strong at this point. There could be a difficult adjustment as he goes to the NFL as he faces more physical receivers who can create separation with their body as much as their feet.

Overall, there is plenty to like about Newsome is capable of in the NFL. He can be a blanket on receivers at times and can be difficult to throw around. If he’s going to get beat, it’s likely going to be for shorter yardage. If he can improve his ankles and get stronger, he could become a complete corner down the road.

Where the Browns Might Select Him: Newsome is likely going to come off the board at the end of the first round, if not soon after. The Browns might have to take him with the 26th pick of the draft, but if they move down, they likely can’t move far, maybe only a few spots if they hope to be able to still select him.