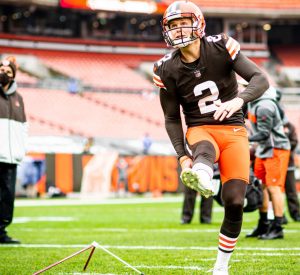 When Parkey thinks of that success and consistency, he thinks about having Gilland and Hughlett by his side, which is why he made the decision to keep his roots planted in Cleveland for 2021.

“I had to come back and make sure I keep the ‘Scottish Hammer’ in check,” Parkey joked, referring to Gillan’s nickname. “Charley and Jamie do a really good job, and that helps me be able to sit back there with confidence and all I’ve got to do is kick the ball.”

Parkey and the rest of the special teams core are among the several groups the Browns were able to keep intact for next season. Their success, as well as the consistency of the offense and cohesiveness of the coaching staff, were among the biggest reasons why the Browns snapped an 18-year playoff drought and emerged as one of the best teams in the AFC.

Both head coach Kevin Stefanski and Browns Executive Vice President of Football Operations and GM Andrew Berry acknowledged the difficulty in bringing all of the key players back to a team after a successful season, but they’ve managed to hold several key groups together for 2021. The offense currently has all of its Week 1 starters back on the roster. The coaching staff made just one change during the offseason, as Jonathan DeCoster replaced Seitu Smith as an offensive quality control coach.

And, with the return of Parkey, the special teams unit is officially back in full, too.

“It’s really exciting to see what Andrew and the front office is doing,” Parkey said. “It’s a great time to be a Cleveland Brown, that’s for sure.”

But not many kickers choose to embrace Cleveland for a second consecutive season — or, for Parkey, a second year in his second stint with the team. He previously kicked for the Browns in 2016, too, and went 20-for-25 on field goals.

For some kickers, the trials and tribulations that come with the unpredictable weather are a reason to steer clear of Cleveland. But not for Parkey, who went 3-for-3 on extra-points and 5-of-7 on field goals when the Browns endured a wild three-game home stretch full of high winds, rain and occasional snow, sleet and hail in 2020.

“That was definitely the hardest month of kicking I’ve ever had to do,” Parkey said. “The ball got up in the air, and the wind was just crushing it. The guys on the other team were asking me pregame what to do, and the honest answer was ‘I don’t know.'”