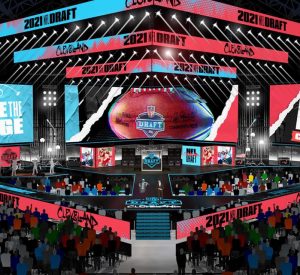 Construction on the main stage for the 2021 NFL Draft began on Tuesday.

CLEVELAND — With a little more than three weeks to go until the 2021 NFL Draft in downtown Cleveland, preparations are underway.

“The planning process has not been exactly what we anticipated, but here we are,” said Mike Mulhall, VP of Business Development at the Greater Cleveland Sports Commission. “Awesome to see steel starting to go up and cranes out there and in three weeks we’ll be welcoming tens of thousands of fans from all over the United States to experience the NFL Draft here in Cleveland.”

Last month, the NFL officially announced its plans to host its draft in downtown Cleveland after holding last year’s draft — which was originally scheduled to take place in Las Vegas — virtually due to the coronavirus (COVID-19) pandemic. The three-day event will take place at three historic Downtown Cleveland locations: FirstEnergy Stadium, the Rock & Roll Hall of Fame and the Great Lakes Science Center, with a select number of prospects, fans and media permitted to attend.


“We are thrilled to be heading to Cleveland for the NFL Draft, which has become one of the most highly anticipated events in sports” Peter O’Reilly, NFL Executive Vice President, Club Business & League Events, said in a press release.

“Just months after executing a safe and successful Super Bowl LV, we look forward to bringing the excitement of our Draft traditions to fans in collaboration with the Browns, Destination Cleveland, Greater Cleveland Sports Commission, the City of Cleveland, and all of our local Cleveland partners.”