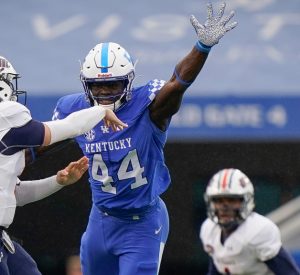 The latest mock draft from former NFL scout and current NFL.com draft analyst Daniel Jeremiah offers a new name for the Cleveland Browns in the first round. Jeremiah projects Kentucky linebacker Jamin Davis to Cleveland with the No. 26 overall pick.

“I’ve been president of the Davis fan club for a while now, but to say he destroyed at his pro day would be an understatement. It matches what I saw on tape, and he fills a need for Cleveland.”

Davis erupted for a fantastic 2020 season after being relatively underutilized by the Wildcats in prior seasons. His athleticism jumps off the screen, and his ability to make plays in space in both the run and pass defense would make him an excellent fit in Cleveland.