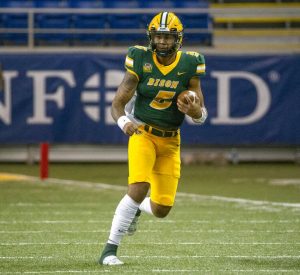 CLEVELAND, Ohio — Two of the top college quarterback prospects in Alabama’s Mac Jones and North Dakota State’s Trey Lance are among the first wave of 10 players who have accepted their invitations to attend the NFL Draft in Cleveland April 29-May 1.

Three of the draft’s top pass catchers will also be on the lakefront for the big event in LSU wide receiver Ja’Marr Chase, Florida tighte end Kyle Pitts, and Alabama receiver DeVonta Smith.

The 49ers, who traded up from No. 12 to No. 3 with the Dolphins, could select Jones, and the Falcons could tab Lance.

Clemson quarterback Trevor Lawrence, who will be the No. 1 overall pick by the Jaguars and their new coach Urban Meyer, has already said he’ll skip the draft in Cleveland and watch it at Clemson with family and friends.

In addition to Jones and Smith, two other players from Alabama’s national championship team will be in Cleveland: defensive tackle Christian Barmore and cornerback Patrick Surtain II, son of the former Pro Bowl of the same name.

Georgia edge-rusher Azeez Ojulari, one of the players the Browns are considering with their No. 26 overall pick, told cleveland.com he plans to be in Cleveland for the draft so he can fulfill a dream of walking across the stage.

Construction of the 90-foot main stage has begun on the lakefront, near the Rock & Roll Hall of Fame.

After being conducted virtually last year because of the pandemic, the live NFL Draft in Cleveland begins Thursday, April 29 with the first round (8 p.m. ET), followed by Rounds 2-3 on Friday (7 p.m. ET) and finishing with Rounds 4-7 on Saturday May 1 (12 p.m. ET). Live coverage will be provided each day on NFL Network, ABC, ESPN and ESPN Deportes.

The NFL hopes to host about 20 prospects in Cleveland, while others will be featured from their homes and draft parties on television.

Here’s the full list of players who have accepted their invitations: