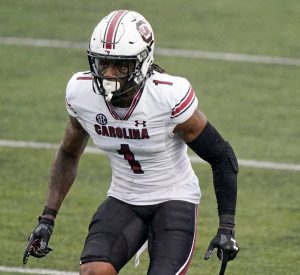 The Cleveland Browns enter the 2021 NFL Draft with cornerback being one of their top position targets.

The 2021 NFL Draft is just three weeks away.

With that in mind, let’s take a look at some of the prospects the Cleveland Browns could target at cornerback, which figures to be a position they could target early in the draft.

The son of former NFL receiver Joe Horn, Jaycee Horn has emerged as one of the biggest risers in the weeks leading up to the 2021 NFL Draft. After being praised for his physical nature, the 21-year-old only increased his draft stock by running a 4.39 40-yard dash at South Carolina’s Pro Day.

While Horn previously appeared to be a realistic target for the Browns at the No. 26 pick, that may no longer be the case. It may not be in the Cleveland front office’s nature to trade up, but a player as talented and versatile as Horn may be worth the price.

Like Horn, Asante Samuel Jr. has NFL talent in his blood, with his father being a three-time Pro Bowl cornerback. In each of his three seasons at Florida State, the younger Samuel showed increasing improvement, ranking as Pro Football Focus’ No. 15 cornerback in the country in 2020.

At 5-foot-10 and 184-pounds, the former 4-star prospect doesn’t possess ideal size, but he more than makes up for it with his athleticism. Of all the cornerbacks who would be considered realistic targets for the Browns at 26, Samuel might possess the highest upside.

One of the biggest risers during the 2020 season, Greg Newsome II went from draft afterthought to a likely first-round pick. Allowing just 12 catches from 34 targets for 93 yards in four games, Newsome ranked as PFF’s No. 27 cornerback in the country.

While the small sample size from the 2020 campaign could be a cause for concern, his upside is difficult to ignore. He also possesses good size (6-foot-1, 190 pounds), which would pair nicely lining up across from Denzel Ward in Cleveland’s lineup.

One of the most intriguing prospects in this year’s draft at any position, Ifeatu Melifonwu measures in at 6-foot-3 and 213 pounds, leaving some question as to what his position will be at the next level. And while it’s possible he could transition to safety, his coverage skills have been impressive, as he ranked as PFF’s No. 35 cornerback nationally in 2020.

Considering his upside, Melifonwu could have plenty of appeal to the Browns, who could stand to add some versatility in their secondary. While No. 26 may be a reach, Cleveland likely wouldn’t be the only team targeting him in the second round.

While his production at the college level left something to be desired, Tyson Campbell remains one of the most talented cornerbacks in this draft. And considering his size (6-foot-2, 185 pounds) and natural athleticism, it isn’t far-fetched to think that the former 5-star prospect’s best playing days may still be ahead of him.

A sure-handed tackler — he missed just six on 99 attempts in three seasons — Campell could make for a good fit playing for Cleveland defensive coordinator Joe Woods, who ran plenty of zone in 2020. At this point, Campell is a most likely a second or third-round target.