Home » Cleveland Browns » ‘It would be sick’ to play with Browns, Myles Garrett 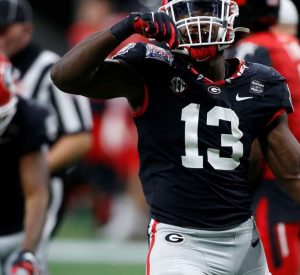 Georgia EDGE Azeez Ojulari is one of the more popular mock draft projections to the Cleveland Browns with the No. 26 overall pick in the 2021 NFL draft. It makes a lot of sense, as Ojulari can play standing up or with a hand in the dirt and attack the opposing quarterback effectively.

In an interview with Mary Kay Cabot of cleveland.com, the loquacious Ojulari gushed over the idea of playing with defensive end Myles Garrett in Cleveland.

“Myles is a freak of nature,” Ojulari told Cabot. “It would be great to have someone like that on the team, to learn from him.”

When asked if he thought about lining up opposite Garrett on the Browns defensive line, Ojulari quickly smiled.

“It would be stellar, it would be sick,” Ojulari laughed. “It would be ridiculous just trying to race him to the quarterback to see who gets there first. It’s going to be a competition in everything we do, no matter what it is.”

He talked up the idea of learning from Garrett on improving his technique and his overall game. Ojulari noted they have similar bends around the edge and “how low I can get around the corner.”

Cody Parkey: Cleveland ‘felt like we were at home’

Mock draft watch: A new first-round LB to know for the Browns

Browns secondary had the most missed games in 2020