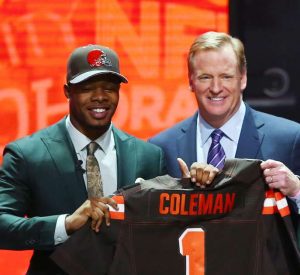 One of the reasons Browns fans appreciate the newfound success under GM Andrew Berry and the current regime is because of the long-term suffering at the hands of prior regimes that just weren’t good at their jobs. Look no further than the utter ineptitude of drafting wide receivers.

From 2011 to 2020, the Browns tried several times to draft a wide receiver. Ten times, in fact. And with the blessed exception of Rashard Higgins, those picks have resulted in swings and misses.

Pro Football Focus tracked the 10-year draft success rate at each position group over the last decade. It’s not surprising to find the Browns finished dead last at wide receiver, especially when weighing the value of higher picks. The Browns finished just below the Philadelphia Eagles and Kansas City Chiefs for the lowest valued success rate at drafting wideouts in the decade.

Thank goodness that dark era appears but a distant and bad memory.

Joe Thomas gets divine praise on the Dan Patrick Show

Azeez Ojulari: ‘It would be sick’ to play with Browns, Myles Garrett

Cody Parkey: Cleveland ‘felt like we were at home’

Mock draft watch: A new first-round LB to know for the Browns